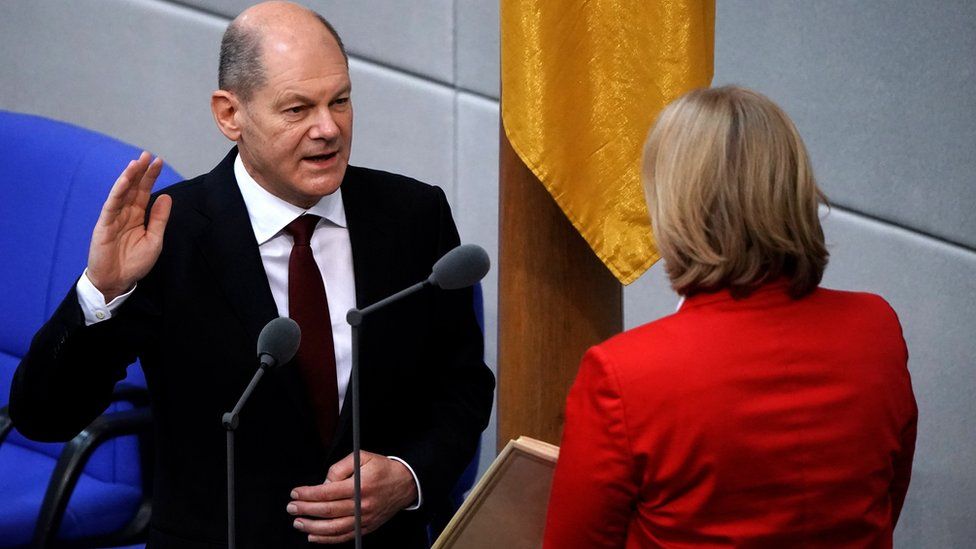 The Leader of the Social Democrates Party (SPD), Olaf Scholz, has been sworn in as Germany's new Chancellor, formally taking power after Angela Merkel's historic 16 years as leader.

Mr Scholz, a soft-spoken 63-year-old who has been a familiar face in German politics for more than two decades has vowed his government would make Europe's largest economy fit for the future by fostering investment in climate protection and digitalisation and no one would be left behind in this major transformation.

He steered the Social Democrats to election victory in late September, positioning himself as the continuity candidate because he played a key role in the Merkel government as a vice-chancellor and most recently as her finance minister.

His centre-left Social Democrats will govern alongside the Greens and the business-friendly Free Democrats on a coalition deal and it is the first time since the 1950s that three partners have formed a government.

The Social Democratic Party of Germany (SPD) is Germany’s oldest political party and one of the country’s two main parties, the other being the Christian Democratic Union (CDU), which Angela Merkel led for 16 years.

Chancellor Olaf Scholz, a former Mayor of Hamburg, has sent a strong signal about where his government's foreign policy priorities lie and has promised he will do all he can to work towards a new start for Germany.

As Angela Merkel left the Chancellery in Berlin, ending a 31-year political career, Mrs Merkel told her former Vice-Chancellor to approach the task "with joy".

The German Parliament, the Bundestag, backed him as Chancellor by 395 votes to 303, and he was then formally appointed as the Ninth Federal Chancellor by President Frank-Walter Steinmeier.

After the vote in Parliament, he was asked by Bundestag President Bärbel Bas whether he accepted the appointment and said "yes". He later took the oath of office but — unlike his predecessor — left out the religious reference "so help me God".

Since the election, Mr Scholz's party has worked with the Greens and the Free Democrats on a coalition deal, which was finally signed and all 16 ministers also took the oath of office, becoming Germany's first cabinet to include as many women as men.

The new government has ambitious plans to fight climate change by phasing out coal early and focusing on renewable energy, but their initial priority will be tackling the COVID-19 pandemic.

This is the moment the career politician has long been waiting for. After 16 years of Angela Merkel, it is a case of out with the old and in with the new, but he has also been something of a political chameleon, a pragmatic politician who straddles left and right so easily it is sometimes hard to know where he stands.

Born in Osnabrück, Northern Germany, Mr Scholz grew up in Hamburg, the city he will later serve as mayor. His grandfather was a railway man and his parents worked in textiles. He and his brothers were the first in his family to go to university.

He was still in high school when he joined the Social Democrats. A fiery young Socialist, he spent a decade as a labour lawyer defending workers threatened by factory closures. Then, as secretary-general of his party under the last centre-left administration of Chancellor Gerhard Schröder, he defended painful labour market reforms with a machine-like efficiency that earned him the nickname “Scholzo-mat.”

When he was first elected into Parliament, he sat with the left wing of his party. Today, he is considered to be to the right, unlike President Biden of the United States with whom he is sometimes compared, but like Biden, some see some leftist reflexes.

Mr Scholz lost his party’s leadership contest to a pair of leftists two years ago, but surprised and impressed some of his fiercest critics in his own party when he pulled out a “bazooka” of hundreds of billions of euros in state aid to help struggling workers and businesses during the pandemic.

He has always played a long game. His ambition to become Chancellor dates back to 2011, according to a close ally. Even political opponents speak admiringly of his political instinct, his stamina and quiet self belief. Three years ago, when his party’s approval ratings were hovering near record lows, he told The New York Times that the Social Democrats would win the next election.

That political flexibility may now make him the perfect leader to tackle what may be his abiding challenge as chancellor, keeping the peace in an unusual and untested three-way coalition with two ideologically divergent parties: the progressive Greens, who want to spend €50 billion, or about $56 billion, on a green transition, and the pro-market Free Democrats, who will control the finance ministry and with it the purse strings.

It will also determine how large a role Germany can play abroad. If Mr Scholz gets too distracted by internal tensions, Europe and the world are bound to feel the loss of Ms Merkel’s leadership, analysts predict.

But if things go smoothly, Mr Scholz’ Germany could turn out to be a pivotal power for European cohesion for more trans-Atlantic unity on fighting climate change and for confronting strategic competitors such as China and Russia and, some hope, for a revival of social democracy in different parts of the world.

In his first major address to Parliament he focused largely on domestic issues, emphasising the immediate need to tackle the pandemic and the longer-term task of modernising both the economy and society and also underscored the importance of strengthening the European Union and standing shoulder-to-shoulder with transatlantic allies in the face of security threats like the Russian military build-up in Ukraine.