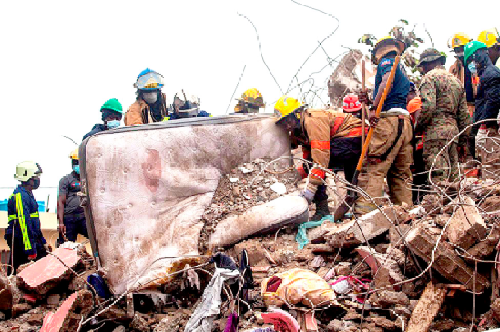 Rescuers trying to save those caught up in the rubble in Haiti after the earthquake on August 14. Credit: BBC

To say August 2021 was eventful might be an understatement. Indeed, it was super-eventful. I will, therefore, attempt a “mixed-grill” article, the literary style called “stream-of-consciousness!”

It is a genre in which the writer captures an individual’s thoughts naturally flowing freely in the mind (consciousness), jumping from idea-to-idea without any logical arrangement.

This is before a conscious effort is made to systematise thoughts into logical blocks/topics. Now to August 2021!

Knowing the love Ghanaians have for football, I dare not, not start with Messi’s emotional farewell-address to fans as he left the team he had played for, for 21years in Spain, Barcelona.

His reception in France to join his new team Paris-Saint-Germain was a carnival!

On August 15, 2021, Afghanistan fell to the Taliban after 21-years as President Ashraf Ghani fled Kabul! The speed of the Taliban take-over described as a “blitzkrieg,” would have wowed great tank Generals like Field-Marshal Rommel of Germany and Gen. George Patton of USA, the main exponents of “blitzkrieg.”

“Blitzkrieg,” the use of German Army tanks in WW2, switching from one front to another at top speed resulting in surprise and shock-action against the enemy, was invented by the German General Hans Guderian after the invention of the tank as a weapon-of-war in the 1920s.

On August 31, 2021, the Taliban announced victory over America, after the US had announced the completion of evacuating its citizens on August 30, 2021.

Chadian President from 1982-1990, Hiseini Habre, who was serving a life-sentence for human rights abuses during his presidency was buried in Senegal without ceremony, out of respect for the thousands of Chadians he executed during his reign-of-terror; hence, his life-sentence for Crimes-against-Humanity.

Climate change manifested itself in extreme weather all over the world. While California had fires, New-York and New-Jersey had floods. In Europe, floods hit Germany, while fires raged in Greece.

Home in Ghana, heavy rains in Upper-West Region cut off the region. In Upper-East, rains and the spillage of Burkina-Fasso’s Bagre Dam caused the annual misery of flooding.

The Pwalugu-Dam promised to be completed in 15 months in November 2019 to solve the problem is six months overdue.

As for the constant advice by NADMO to villagers to “move to higher ground,” a frustrated villager asked, “Where is that higher ground they want us to move to every year before the floods, and return after the floods?”

On September 2, the Police-MTTD announced that the 200 RTA deaths recorded in August had increased the figure from January-August 2021 to 1,900 dead.

Two MPs were involved in RTAs, one in Bono Region and the second in Volta Region. As an angry man said on radio maybe uncharitably, if they had died, government would have been forced to wake up to the carnage of RTAs.

In Bongo District in Upper-East Region, reports had it that, the price of a 500ml bottle of “Bongo Water” increased from two-cedis to ten-cedis overnight following the announcement by the DCE that water in Bongo had aphrodisiac properties; hence, the high teenage pregnancies in the district!

I addressed the RTAs issue in my article last week titled Road Traffic Indiscipline & Traffic Lights! Undisciplined drivers must be severely sanctioned to include suspension of licences/outright bans from driving or paying higher insurance premiums.

It may be early days, but the IGP deserves commendation for enduring the pain of traffic the way we ordinary citizens do, with no police-riders clearing the way for him!

With the excitement Messi’s transfer generated, why can’t we develop our local football league like the English and European leagues we get so excited about, so we can sell players at high prices?

Climate-change is real; hence, the floods and fires the world over. In Ghana, once real-estate agents acquire a piece of land, the first thing they do is to clear all vegetation, including trees older than Ghana, thereby cumulatively upsetting the climate! The appropriate agencies must wake up and stop this!

Asking villagers in Upper-East/Upper-West “to move to higher ground” does not address the problem of annual floods and Burkinabe-spillage. Those paid to do so must think out realistic solutions.

Finally, former Chadian President Habre’s ignominious end should remind leaders that “no condition is permanent!” When Oliver Cromwell executed King Charles 1 of England in 1648, he never imagined his own body would be exhumed two years after his death in 1658, tried and executed/decapitated.

Leaders, you take the oath to serve! Do so! Leadership, lead! Fellow Ghanaians, wake up!