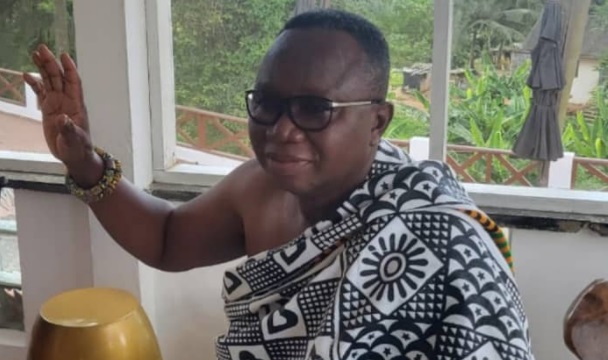 Does the marking of a birth milestone cause us to look back with remorse over years past or with each additional year in age, trigger a reinvention of sort? Perhaps with the passing of time, come new depths of revelation, insights, new values and a profound appreciation for life.  My encounter with Kofi Totobi Quakyi suggests so.

It jolted me to take a closer look at the evolution of this man who emerged on the national scene some 45 years ago as a youth activist and specifically, President of the National Union of Ghana Students (NUGS) from 1977-1978. He was on the frontline of the emergent political movement that fought to change the narrative of Ghana for the better. With decades of experience in public service, he is well versed in governance, communication and national security issues.

A while ago, I had the rare opportunity to have an in-depth conversation with Hon. Kofi Totobi Quakyi known in his close circles as KTQ, a legend in contemporary Ghana politics. The original request was for an interview, but he declined for two reasons. First, 2020 elections were around the corner, and he did not wish to take the spotlight away from John Mahama, his party candidate. Second, he was working on his memoirs and did not want to preempt the contents.

Even so, the conversation turned out to be more extensive than the interview requested. Enigmatic, he appears distant and withdrawn at a glance, but as I further engaged him, the more welcoming and open he became. He was highly animated once the ice fell off. I found his conversational skills bedazzling. He is a man of considerably good humour. He is calm, intelligent, soft-spoken, comes across as a formidable, and astute politician. He describes himself as a stickler for principles and consistency in thought and action. What he dislikes most, he says, are people who have no sense of gratitude.

Hon. Quakyi spoke about being born into a well-to-do family at a place adjoining Ngyeresia, a fishing village near Sekondi. Both parents were teachers who took to farming and property development at some point and became hugely successful. He explained how the contrast between the family's relative affluence and the poverty of those who worked for them on the farms helped shape his outlook on life. Often, he eavesdropped on their conversations lamenting the deprivation in their homes. It gave him an inner sense of satisfaction to share with them what came his way. He would rather spend time in the home of Papa Gariba, who kept his father’s ranch, than anywhere else. According to him, no waakye tasted better than the one cooked in that cheerful compound house that was their home. He still maintains the very close bond he forged at Sekondi Zongo during those formative years.

He told of how he joined the CPP young pioneers on the blind side of his father, who was rabidly anti-Kwame Nkrumah. He went on to describe how he met Dr. Keli Nordor; a young doctor posted to Effia Nkwanta hospital who treated him for a concussion during a game of football at Fijai secondary school, where he did his sixth form. As tiny and skinny as he was then, Dr. Nordor teased him to try his luck elsewhere other than football. They soon became friends. Dr. Nordor would drive up to the school and engage him on socialism and left-wing ideology. He brought him books and encouraged him to join Ghana United Nations Students and Youth Association (GUNSA)  debating society and Pan African Youth Movement (PANYMO). Years later, Dr. Nordor took him to the late veteran trade unionist John Tetegah for mentorship

Hon. Quakyi was one of the brightest and youngest in the early PNDC/NDC set-up. He still sports his trademark boyish good looks even now and remains a highly influential figure in the NDC. It can be argued that his remarkable influence on both his party and the country in his youth to date is unparalleled in comparison with today's young political activists and youth leaders. He gives credit to a number of senior men including Ex-President Jerry John Rawlings (JJ) who took time to mentor him because they saw not just his potential but humility and an eagerness to learn. Humility and spirit of gratitude he says paves way for greater heights.

Hon. Quakyi touched on what motivated him to join the leadership of the student movement and spoke extensively on events of that era. He saw its potential to help galvanize change to restore hope to a country in crisis.

One story that captivated me most was during his eventful tenure as NUGS President when there was an attempt by agents of the ruling Supreme Military Council (SMC) to eliminate him one night on the Weija road. Most unfortunately, it lead to the death of a fellow student leader called Roland Yorke. Hon. Quakyi himself suffered a spinal injury that left him bedridden for over a year and still suffers the effects. A copy of the Daily Graphic editorial of May 3, 1978, expressed regret at the incident and appealed for calm in the country.

He is a graduate of the University of Cape Coast (UCC) where his political career started as a student leader. An educationist by training, he worked as a teaching assistant at the History Department of the UCC and later had a brief stint as an administrative secretary of the Industrial and Commercial Workers Union of the Trades Union Congress. He is the longest-serving Minister of Information in Ghana's history and the first Minister for National security in the 4th Republic. He served as Senior Political Adviser at the Presidency between 2009 and 2012. At various periods between 2009 to 2016, he served as Chairman of the Governing Boards of the National Communications Authority (NCA) and Food and Drugs Authority (FDA).

These days Hon. Quakyi seldom makes public appearances. Between the mid-1980 to 2000, he was a household name and featured prominently in the media. He gave a biblical explanation for keeping a low profile.

“When Jesus emerged on the scene, John the Baptist famously said: I must decrease so that you will increase. In other words, a time comes when you must cede space to a new generation more in tune with the present. The new kids on the block need space to prove their worth."

As a man of faith, he believes in the power of the gospel of Christ and the light it shines. His compassion and humility stem from his understanding of what God expects from his people. He says his late mother and his wife have been his prayer warriors through the ages.

A citation conferring the Companion of the Order of the Volta on him in 2016 credits him with several landmark achievements, Student Representative on the Ghana Chapter of the African Liberation Fund Committee at age 17, fearless advocate for political change, internationalist for progressive causes, responsible for transforming Ghana's information/communication infrastructure, including introducing colour television transmission, FM broadcast, among others. Mention is also made of the yeoman’s role he played in ensuring a historic, smooth and peaceful political transition after the 2000 elections in his capacity as minister for national security. His commitment to the cause of the NDC and the agenda of building a better Ghana is exceptional.

Hon. Quakyi was instrumental in setting up ATL FM, the campus radio station at his alma mater now named after him. Uncle Kofi, as many affectionately call him, loves music. He is a guitarist and holds a certificate from the Royal School of Music. He is the composer and arranger of the famous NDC Anthem: Arise Arise, which the late Jewel Ackah performed. He loves gardening and keeps a collection of parrots and dogs.

He is very approachable, affable and selfless. Accounts by those around him have it he is extraordinarily kind and generous. Some other testimonials deem him, an unsung hero who lives a quiet existence. People from all walks of life consistently express their long-term high-level respect for him in the manner he carries himself. Those who have worked with him commend him for his outstanding leadership abilities and wish the very best for him. Even his detractors credit him for the immense contribution he has made to the evolution of Ghana politics.

Hon. Kofi Totobi Quakyi in my view is quite simply a great man. I am not referring to his prowess as a politician, I speak of the simple person in the man. For me, his simplicity is the essential mark of his greatness.

I wish him well as he marks yet another milestone in age. Happy birthday Hon. Quakyi.

I look forward in anticipation to reading your memoirs.