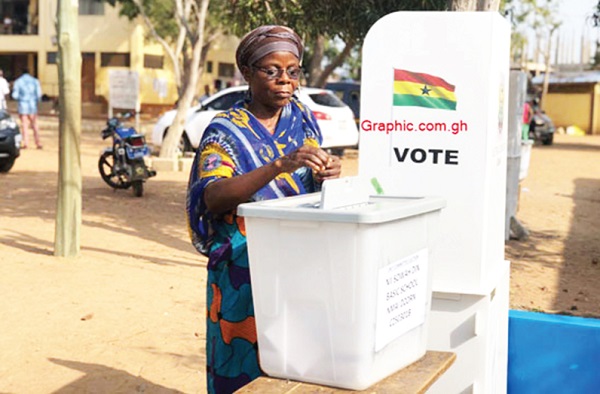 We are 23 months away from the next election, but it is never too early for political parties to commence the planning process towards it. One of the activities that have become a feature of our elections is pre-election surveys and polls.

The Afrobarometer Survey in 2005 (Round 3) began asking: “If Presidential elections were held tomorrow, which candidate’s party would you vote for?” Ghanaians have regularly said they would vote for the New Patriotic Party (NPP) (2005, 2008, 2012, 2014, 2017 and 2019) up until the most recent round (Round 9 2022) where more Ghanaians said that they would vote for the National Democratic Congress (NDC).

I must point out though that our election outcomes have shown that voting intentions do not always mirror voting outcomes. What makes the most recent Afrobarometer (2022) round intriguing is that it is the first time that Ghanaians are saying they intend to vote for the NDC. If another Afrobarometer is conducted before 2024, it is one of the signals both parties must look out for to see the extent to which public sentiment has changed or otherwise.

Should the National Commission for Civic Education (NCCE) conduct its Matters of Concern To The Ghanaian Voter in 2024, there are two issues to which the two political parties must pay attention – a) reason for willingness to vote in the forthcoming election and b) willingness to vote for the same party in the coming election as a respondent did in the previous election.

Although the survey does not ask which specific party a respondent voted for in the previous election, the responses in 2016 signalled trouble for the incumbent in a way it did not in 2020.

Another respected pre-election survey worth paying attention to is the one conducted by the Centre for Democratic Development (CDD-Ghana). Per the survey, parties must pay particular attention to a) whether the country is going in the right or wrong direction; b) evaluation of government performance; c) whether another party can do a better job and which party that would be; and d) which party’s message resonates with voters.

Again, anyone who paid attention to the 2016 and 2020 versions would have noticed immediately the task faced by the incumbents in those elections.

If the iRIS Research group conducts its pre-election work once again, parties must pay particular attention to their typological mapping of constituencies into safe, leaning and toss-up categories. Whoever monitored the findings of their work in 2020 would not have been surprised in terms of how the parliamentary election turned out.

Also, the Centre for Social Science Research, Kumasi Technical University Election Prediction combines an opinion poll with a quantitative predictive model based on past election data. The model predicts a number of scenarios—the worst likely outcome for the incumbent party, and the best likely outcome for the main opposition party and other political parties. It is definitely worth it to pay attention to it.

Last but not least is Prof. Owusu Mensah’s work on presidential elections (2016 and 2020) and his research on Parliament in 2018, which measured attitudes towards Parliament and parliamentarians. Given his current responsibility as the Director of Research at the seat of government, I am unsure or his plans to continue the work but if he does, do pay attention.

Across all polls, parties must pay attention to voter intentions. The various individuals and organisations who conduct these pre-election surveys and polls do not coordinate with one another. However, when 2016 and 2020 are studied closely, voter sentiments converged on a single narrative – the incumbent faced a tougher re-election political landscape in 2016 compared to 2020.

Voter intentions also converged on a single point – change of the governing political party in 2016 and the re-election of the incumbent in 2020. For what it is worth, parties will do well by aggregating the information from various polls, including any they undertake internally to see know the singular narrative of voters.

The writer is a fellow at CDD-Ghana