In defence of the false: Ethical advocacy 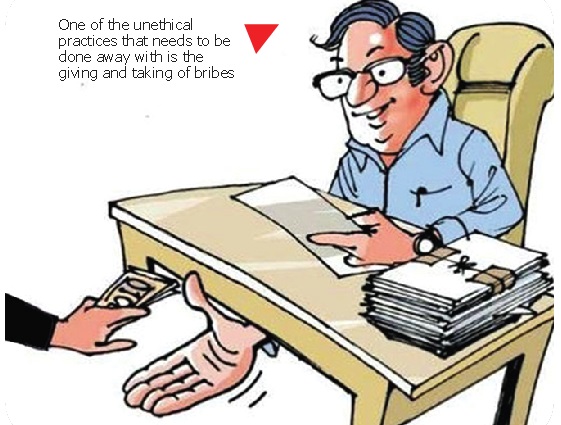 Ghana is endowed with rich human and non-human resources that if managed effectively and efficiently, could catapult it into a leading country in Africa.

Despite this, the country is in lack. Why is it so? It is because sections of the citizenry have failed to serve as vanguards of required action in the use of resources meant for the larger community, including national, local communities, religious organisations and corporate entities for the common good.

Judicious use of resources promotes harmony, peaceful coexistence and progress in society. Instead, what we see, hear and read in the print and electronic media, as well as observe around us is a few greedy, inward-looking and selfish individuals taking control over resources meant for all and using them to satisfy their selfish and myopic desires to the neglect of the common good.

The most intriguing part of it is that those in control of the general resources fight among themselves for the lion’s share dividing the rest of the citizenry into factions, which inhibit national progress.

This article calls for the awakening of ethical individuals endowed with the courage to advocate for the right use of national resources for sustainable development and dispute any false defences that are meant to justify wrong/corrupt actions.

Factions — In defence of the false

Factions in the perspective of this article are groupings that blindly support a particular political party with a selfish motive of being noticed and rewarded accordingly.

There are two major political factions who are followers of the “for” and “against” groups who control the resources at a particular time. The third is the “helpless masses” who decide who should lead them without knowledge of the innate qualities of whomever they support.

Interestingly, both the masses and the “for and against” people idolise their leaders, who to them have no flaws, and whatever such persons do is right.

Also, to such individuals, the election of leaders must be based on tribal affiliations. They blindly defend every corrupt move their leaders make with passion and aggression on all platforms available to them and are ready to exterminate anyone that has a contrary view or stands in their way of achieving their targets.

Thereby, forcing the majority into submission to their evil acts, for their leaders to dominate and rule. These are the party loyalists with the desire to gain favour and be rewarded in the end. They refuse to acknowledge the glaring truth. We hear people shamelessly defending the false making them sound like the truth.

The Holy Scriptures describe them as “grumblers, complainers, walking according to their own lusts; and they mouth great swelling words, flattering people to gain advantage” (Jude, 1:16). They have taken over TV and FM radio stations making negative and derogatory statements without validated facts. Must it be all about insults? Is there no positive way of calling culprits to book?

According to Cooperrider and Whitney, in their book chapter titled, “A positive revolution in change, “a negative voice is a visionless voice, and a visionless voice is no voice.” Accordingly, untrue negative assertions in the media are voiceless. Unfortunately, the majority of the masses are won to their side to continue their corrupt agenda. What Ghana needs is forward-looking people with voices that will bring about the expected change it so desires.

The last group in the standpoint of this article consists of those who have the know-how and experience but are passive due to fear of being attacked. This group of people keep to themselves by minding their own businesses and criticise authorities (corrupt individuals) behind closed doors while expecting others to do what they failed to do.

These people though endowed with the right skills and competences yet lack the confidence to take calculated risks to contribute towards the progress of their nation. What must be done to minimise the corrupt activities of factions? Could ethical advocacy address it to an extent?

What Ghana needs is a crop of ethical advocates who, regardless of the consequences, would stand for the truth, speak the truth, and promote the judicious use of the rich resources Ghana is endowed with to promote progress.

Ghanaians need sound and truthful information for good decision-making. Ethical advocacy results in the public promotion of ethical principles — good moral behaviour, fidelity, justice, anti-corruption acts, and truthfulness. It champions social justice and ensures the right policies and laws are implemented in the letter. It fights against defamatory speeches often presented on the print and electronic media or false statements of facts that damage people’s character.

It promotes the interest of the common good by ensuring inclusion, diversity, fairness, consistency and harmony in society, where all, including the vulnerable, are catered for. Advocates, on behalf of others, confront ethical dilemmas arising from the substance of their advocacy. Ultimately, ethical advocates have a voice because they are positive in their advocacy. This is food for thought and perhaps the solution the nation so seeks.

The writer is a lecturer at Ashesi University, Accra