Who is Eddie Nketiah? Arsenal's Carabao Cup scoring sensation who was rejected by Chelsea 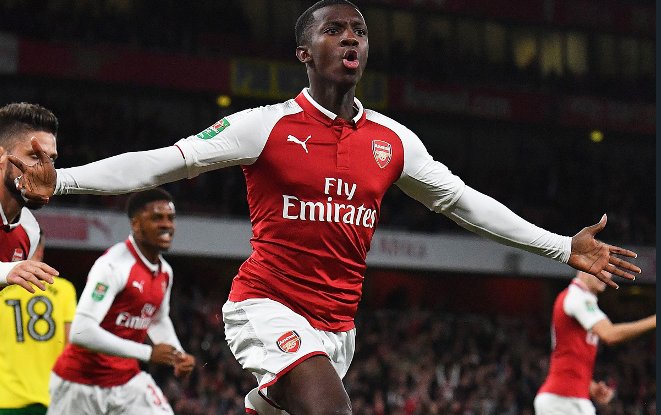 It took Eddie Nketiah 15 seconds to leave his mark on Arsenal’s Carabao Cup campaign — and what a crucial goal it proved to be.

The 18-year-old’s goalscoring prowess has seen him bag an array of goals for the Gunners’ under-23s side yet it was a simple tap-in from close range against Norwich which has announced him to many supporters across the world for the first time.

Nketiah’s second goal sends Arsene Wenger’s men into the quarter-final of the cup competition and the Frenchman will be confident of winning a trophy which has traditionally been used to blood young players over the years. A clinical, fast and technically astute forward, Nketiah’s goals against the Canaries will almost certainly see him given an opportunity in the latter rounds of the competition.

Interestingly, Nketiah was rejected by Chelsea as a schoolboy due to doubts over his physical presence – a facet of his game which clearly doesn’t faze him when up against bulky defenders. Speaking about his style of play last season, the youngster is fully aware of the areas his strengths lie as well as where he needs to improve.

"I was so down, but then Arsenal found out I was available, contacted my family and invited me to train," he said.


"Within a week I was told that I would be offered a scholarship. I think it is important to bounce back quickly from disappointment and Arsenal gave me the opportunity to do that."

As the first player born after Wenger’s appointment to score for the club, Nketiah quite literally represents the next generation of professional footballer. It wouldn’t be an exaggeration to label him Arsenal’s future either as his clinical nature at youth level saw him end the 2015/16 season as top scorer for the U18s, scoring 24 goals in 28 appearances.

"My game is mainly pace, movement and finishing,” said Nketiah in March.

"But I’ve made an effort to hold the ball up better which is something vital for the team and that Olivier Giroud does so well.

"I have also worked hard on my heading and have already scored three headed goals this season."
After signing his first professional contract in September 2016, he was included on Arsenal’s pre-season tour of Australia and China this summer.

“I achieved the contract through working hard and trying to keep improving, and as a professional, that’s something that I’m determined to keep doing because it takes me a step closer to the first team and I know how high the standards are.”

The future is bright for both club and country with a hat-trick for England U18s against Qatar showing that Nketiah can score goals in whatever environment he plays in. There have been cases of players graduating through academy systems and never fulfilling their potential but the feeling with Arsenal’s latest prospect is that there hasn’t been a striker come through like him for many years — and what a way to enter the first team fray for your boyhood club.