From Akufo-Addo in DC to Pelosi in Accra 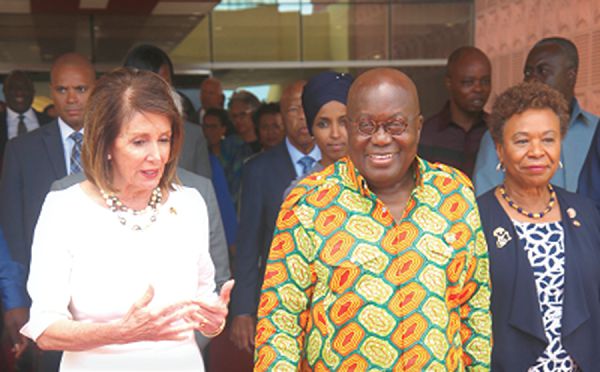 Washington DC - May 1, 2017: The 115th Congress of the United States of America passes a Resolution (‘HR 1242’) establishing the “400 Years African American History Commission” to carry out activities to commemorate the anniversary.

On that day in 2018 at the US Press Club in Washington, President Akufo-Addo, on behalf of the people of Ghana, read and signed the following Proclamation:

‘Whereas 2019 marks the 40-year anniversary of the arrival of the first enslaved Africans to English North America in 1619…;

‘Whereas the Government of the Republic of Ghana has, under my leadership, made it a national priority for Ghana to actively engage the effects of forced and voluntary migration of Africans to the Global North and to extend a hand of welcome home to Ghana to Africans in the Diaspora defined both as Ghanaians living abroad and people of African descent dispersed through the world as a result of the Trans Atlantic slave trade…;

“Whereas the 115th Congress Resolution HR 1242 … establishes the 400 Years of African American History Commission… ; “Whereas Ghana has more African Americans living in the country than any other African country;“Whereas Ghana’s Immigration Law grants that a person with the Right of Abode ‘shall be free to live and to come and go into and from the country without let or hindrance’, and “Whereas the Right of Abode Law confers specific eligibility to “A person of African descent in the Diaspora”

“Now therefore, I Nana Addo Dankwa Akufo-Addo, President of the Republic of Ghana, proclaim 2019 as the Year of Return, Ghana 2019”

At that launch, the Chief Executive Officer of the Ghana Tourism Authority (GTA), Mr Akwasi Agyemang, situated the ‘Year of Return’ within the context of the Christian Bible in which the people of biblical Israel were promised a return to their rightful land after 400 years in exile.

With the Washington universal launch, Ghana was thus empowered to proceed with its intention to undertake activities throughout the year, 2019, to commemorate the event.

The climax of these activities was the arrival in Ghana last Sunday, July 30, of U.S. House Speaker Nancy Pelosi with a U.S. congressional delegation to join in the commemoration.

Ahead of the trip, Karen Bass issued a statement noting: "400 years ago this year, our ancestors were first brought to (the future United States) in chains.

We have come so far, but we still have so far to go."

Between the Washington launch by Akufo Addo and the 2019 visit by the US Congress delegation, the Ghana Tourism Authority has served Ghanaians and the world with quite a tasty dish of pleasant memories, involving high profile celebrities, events and visitations.

No wonder the international media’s headline is: “Ghana Becomes America’s Celebrity Safe Haven” But it was not from America only that celebrities poured into the nation.

The pilgrimage started off with the KENTE Party by Ghanaian international artiste, Fuse ODJ under the banner of his ‘This Is New Africa’ (TINA) festival.

Says Akwasi Agyemang: “With Fuse as someone invited to perform to the global audience during AFCON, we saw the advantage of the pulling power of  celebrity endorsement.

He came, and true to plan, he brought in a lot of second generation Ghanaians from the U.K.”

Then came Austrian born actor of Ghanaian descent, Boris Kodjoe, with 40 other stars for his week-long ‘Full Circle Festival’.

The emotional impact of the pilgrimage got uncontrollable. in the first few minutes of the New Year, Naomii Campbell tweeted to her fans in the United States: “I stand here with @NanaAkufoAddo and my mother, Valery Morris Campell # Ghana the Motherland and true paradise”.

An interesting visitor was internationally renowned actress, A.J. Johnson. She came here for the first time in December and declared that “I have found new meaning coming to Ghana.

This is really my family that I was missing all this while”. With an ambitious project titled,”Bridge to Bridge” she recently premiered her world class blockbuster here in Accra.

The international media lapped at the juicy news unfolding from Ghana.

The trusted network, CNN, has endorsed Ghana’s ‘Year of Return’ and has recommended Ghana as one of the 19 “places to visit” in 2019.

The BBC, Al Jazeera, Ebony Magazine and SABC have all been here and ran features on Ghana.

Mr Nathanya Yehuda Halevi, a Diasporan returnee known to many as Rabbi Kohein, who is now the Executive Director o the PANAFEST Foundation, thinks that besides the physical attractions, Ghana qualifies to speak for Africa or to act for Africa in the Year of Return “Right now Ghana has the largest population of diasporan Africans living in its territory from North and South America, Central America and the Caribbean.

Among the very few countries who have responded to the AU call to every African nation to re-engage the diaspora to their nations, there is Ghana.”

The country’s efforts are yielding fortuitous benefits. The target of the Tourism Authority is an increase in US market arrivals by 107,000 this year, generating approximately US$771 million at the current average tourist spend of $2,203, says Akwasi Agyemang.

Now read the antecedent to all of above.

Back in the USA, every woman who handles the doll gets pregnant.