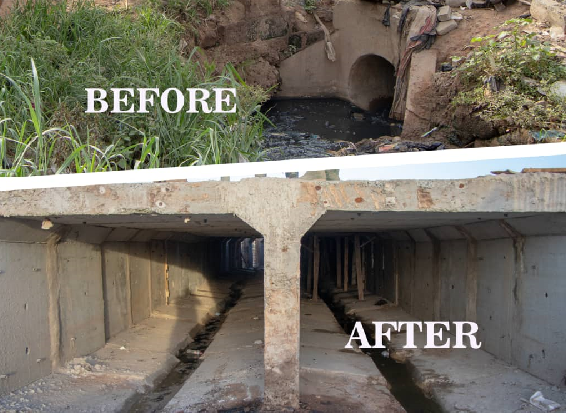 "This area used to be inundated with flood water at the slightest rain fall. Life was so uncomfortable for us because we lost our livelihoods to the flood. Many people also lost their lives to the perennial flooding. But, since the drains were constructed here, we have not experienced flooding for about three years now; and we are really grateful."

These words from 35-year-old Maame Efua, a resident of Mallam, who I encountered December 18, 2020, summed up the joy of a people who have been liberated from perennial flooding that hanged like an abattros on their neck.

I met her at the Mallam Market where she plies her trade as a fish monger.

My mission was to find out how the Mallam Junction drainage project and other priority drains that were constructed under the Greater Accra Metropolitan Area (GAMA) Sanitation and Water Project had impacted the lives of the residents in the adjoining communities.

The Kaneshie-Kasoa stretch of the Accra-winneba Highway which hosts communities such as Kaneshie, Odorkor, Mallam and Gbawe, had gained notoriety for perennial flooding and its attendant consequences.

Anytime it rained, the residents in those areas were left to count their losses as their businesses and homes got submerged in flood water.

Motorists and other road users also bore the brunt anytime it rained, with flood water causing traffic jam and making commuters to waste economic time on the road.

It was in a bid to address this development challenge that the GAMA drainage project was rolled out. 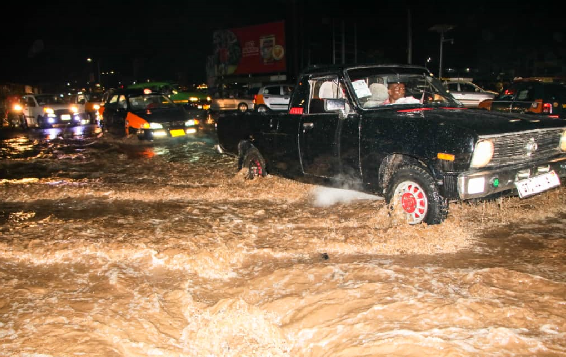 As part of the GAMA drainage project, work began on a 500-metre double cell culvert drain at Mallam Junction on Monday, April 30, 2017 and was completed within 50 days.

The project was undertaken by China Shanxi Si Jian Group Company Limited, with Weruw Consulting as the engineering and supervising consultant.

The project designs and scope of work included the construction of a double cell box drain of 150 meters (M) by 4.0mx2.5m, provision of a reinforced concrete open rectangular channel of 80.0mx7.0mx2.5m, as well as deepening and widening of earth channel of about 230m long.

The GH¢6 million Mallam drain was among some priority drains that were re-engineered under the GAMA sanitation project that started in 2015 with a $150 million funding support from the World Bank.

Other priority drains that were constructed under this facility are located at areas such as Gbawe, Kaneshie First Light and Agbogba, while some minor ones have also to been constructed across the assemblies within the Accra Metropolis. 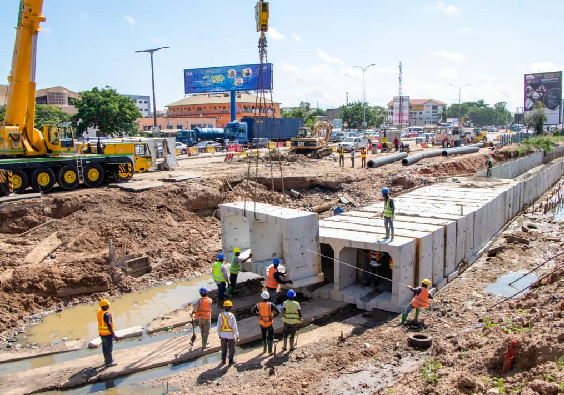 A Sanitation Engineer of the GAMA project, Mr. Gabriel Engman, said the total investment plunged into both the prioritised emergency drainage interventions and the several localised drainage structures implemented in the GAMA municipal assemblies was in excess of GH34 million.

He explained that the drainage facilities were primarily meant to improve the capacity of existing drainage infrastructure which had smaller culvert that were unable to carry the huge volumes of water.

Additionally, he said the interventions were to enhance awareness creation on environmental sanitation and promote behavorial change.

The expert view of the GAMA sanitation engineer corroborated two scientific studies by UN Habitat – “Accra Ghana: a city vulnerable to flooding and drought-Induced migration” and “The three dimensional causes of flooding in Accra, Ghana” conducted in 2011 and 2014 respectively, which pointed out multi-faceted causes of the perennial floods in the capital city.

One of the key causes identified was the poor flow in drainage networks.

A section of the 2014 findings reads: “Accra has an underdeveloped drainage network. Several natural river and stream courses drain the city from the north to the south. Some short sections of these large river channels have been reinforced with concrete dykes.

“Besides these water courses, there are drains that run along most asphalt streets, and much smaller ones laid in some of the small, previously planned neighbourhoods, draining sewerage and run-offs.
“In all, engineered drains are a small fraction of the city’s requirement. Apart from their insufficiency, many have been observed to be undersized, unconnected or improperly channelled. As a result, some floods have been traced to such faulty drains.”

The first light drain receives stormwater from both the Kofi Owusu and the Bubiashie Communities.

Over the years, the communities have become heavily populated and settlement spread to the flood plains, and due to the rapid changes in the land use pattern of the drainage basin, rainfall run-off concentration increased the risk of flooding.

Lack of adequate capacity to discharge the flow of water into the Odorkor-Kaneshie drain resulted in massive flooding of the Kaneshie first light area.

The project intervention increased the capacity of the drain to allow for increase storm water to flow quickly and reduce the flooding effects upstream the junction and in the communities.

Additionally, the drainage improvement work at Gbawe was covered under the GAMA drainage component.

The Gbawe drain, which is located at Gbawe, around Mallam High-Tension in the Ga South Municipality, takes its source from the Gbawe Manye community and a tributary drain to the Lafa stream.

The original channel course was seriously altered because of heavy encroachment, resulting in the introduction of several changes in the flow direction.

This development compelled run-off water to flow in open channels along streets in the community.

In addition to these projects, the improvement of the drainage facility at Agbogba was carried out.

The Agbogba project involved the construction of two culverts across the Odaw along the Islamic School road and Gold Avenue School Road.

The objective of the intervention was to open up the restriction to flood conveyance across the streams and also reduce the back flood effects due to the location of inadequate hydraulic structures that accounted for the perennial flooding of the communities upstream.

Since the completion of these drainage projects, the perennial flooding at Mallam Junction, Kaneshie First Light and other areas that made life so uncomfortable for residents in those areas and commuters has become a thing of the past.

Some of the residents who spoke on the impact of the GAMA drainage project were excited that their livelihoods that used to be at the mercy of the flood waters have been saved.

For instance a 38-year-old driver, Kwasi Osei-Bonsu, said it was refreshing that the gridlock that usually occurred at that section of the Accra-Kasoa highway and created inconveniences for drivers, road users and commuters had drastically reduced.

"When the Mallam Junction drainage project was being constructed, we had some initial inconveniences because we sometimes spent more time on the road due to road diversions; but the ordeal we go through anytime there was flooding has become a thing of the past, and we are happy that the sacrifices have paid off," he said.

For Diana Eshun, the fact that residents of Mallam and other adjoining settlements do not have to run helter skelter anytime the clouds gathered was satisfying.

"Gone are the days when we had to battle with flooding to protect our livelihoods. The drainage project is one of the best thing that happened to us, and we thank those behind the project," she said.

Past experiences have shown that during the peak of the rainy season in the capital city, homes and businesses in areas such as Odawna, Kwame Nkrumah Circle, Obetsebi roundabout, Kaneshie, Abossey Okai, Nima and Mallam are inundated with flood water, leading to loss of lives and properties running into millions of Ghana cedis.

Choked, narrow and poorly constructed drains have always been cited as one of the causes of the perennial floods.

It is in the light of this that more efforts need to be made to construct more improved drains in flood-prone areas to mitigate the impact of floodwater anytime it rains.

In the interest of sustainability, it is also important for the metropolitan, municipal and district assemblies (MMDAs) under whose jurisdiction the GAMA priority drains fall, must also take steps to protect these facilities from being damaged.

Even as these drains have been constructed to improve the drainage situation in flood-prone areas, there is the need for attitudinal change in the way residents in those areas manage solid waste, especially plastics and scrap metal, so that they do not end up choking the drains.

The MMDAs must enforce the sanitation laws to deter members of the public from dumping waste indiscriminately.