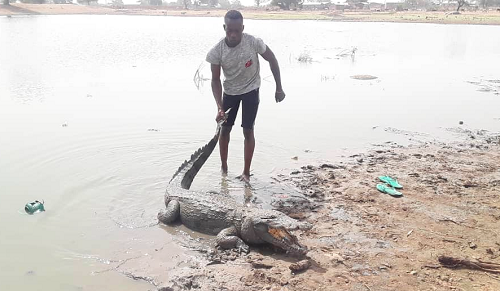 Mr Musah Haruna, a Pool Attendant at the Zenga Crocodile Pond, holding the tail of one of the crocodiles after calling the reptile out of the pond
30.5k Shares

The people of Paga believe they have special connections with crocodiles, hence there is mutual respect between humans and the reptiles.

It is a taboo to kill, harm or eat the crocodiles in the area. It is still believed that if a crocodile dies at Paga, the death of one of the residents is imminent. The souls and spirits of the Paga people are ,therefore, linked to the crocodiles.

There are two major historical accounts told centuries ago that explain why crocodiles at Paga are sacred and revered.

In one of the accounts, a famous hunter at Kampala in present day Burkina Faso, known as Nave, went out to hunt in the bush one morning. It is worthy to note that during that period, Nave could hunt across borders. With his hunting dog following him, Nave clutched his wooden bow and hanged his quiver of poison tipped arrows over his shoulder.

However, events did not go as planned as he pursued an antelope into an Aardvark hole. The Aardvark (a medium-sized, burrowing, nocturnal mammal that is native to Africa and has a long pig-like snout, which is used to sniff out food), got frightened and escaped through the entrance of the hole but covered it up with sand and trapped Nave inside the hole.

The antelope Nave was pursuing escaped through another route but the hunter (Nave) could not see it as the hole in which he had been trapped was dark. In despair, Nave sat on the floor but back at home Nave's parents were worried because his hunting dog returned home without its master.

On the dark dusty floor of the Aardvark hole, Nave laid prostate as his lips were dry while his skin turned pale as a result of the lack of food and water.

Crocodile to the rescue

He became unconscious but there was a crocodile that was hiding in one of the cool chambers of the hole and watching all that Nave was going through. The crocodile then crept to Nave and
used its tail to brush the dirt off the hunter's chest. He regained consciousness instantly and rose to follow the crocodile out of the hole and then to a nearby pond.
Nave quenched his thirst from the water in the pond and filled his water container with enough water to last the journey back home. He recounted his experience with the crocodile and believed that the crocodiles had been following him on his hunting adventure from Kampala to Paga in the Upper East Region where Nave later settled.

He was surprised to see many crocodiles inhabiting ponds at Paga similar to the ones he found at Kampala, his hometown.
Nave, therefore, reaffirmed his ancestors’ vow that nobody should kill and eat the crocodiles. It is still believed that the death of a crocodile at Paga signifies the imminent death of one of the residents. The souls and spirits of the Paga people are ,therefore, linked to the crocodiles.