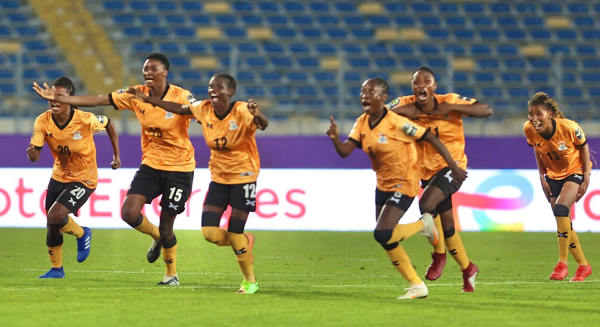 Zambia have become the first African team to qualify for the 2023 Women’s World Cup (WWC) after beating Senegal in their quarter-final clash to advance to the semi-finals of the ongoing Women’s Africa Cup of Nations (WAFCON) in Morocco.

The victory sent them to the semi-finals for the first time on their second attempt and they picked one of the four slots for Africa at the 24-nation WWC to be hosted by Australia and New Zealand next year.

It is a historic feat for the Zambians who will be the first side after Nigeria to qualify for two major world tournaments, having also made their debut at the 2020 Olympic Games, which was rescheduled to 2021 in Tokyo due to the Coronavirus (COVID-19) pandemic.

This first quarter-finals clash, the first time the two sides were playing each other, was a game that the Senegalese could have won, but inexperience and poor finishing, cost them having taken the lead in the 61st minute through Nguenar Ndiaye.

Nine minutes later, the Zambians capitalised on a fumble from the goalkeeper who failed to grab the ball after an attempt to save a goal-bound shot and lurking Avell Chitundu sneaked in to head the ball into the back of the net.

From there on, either side tried to go ahead of the other, but there was no positive outcome, pushing the game into penalties.