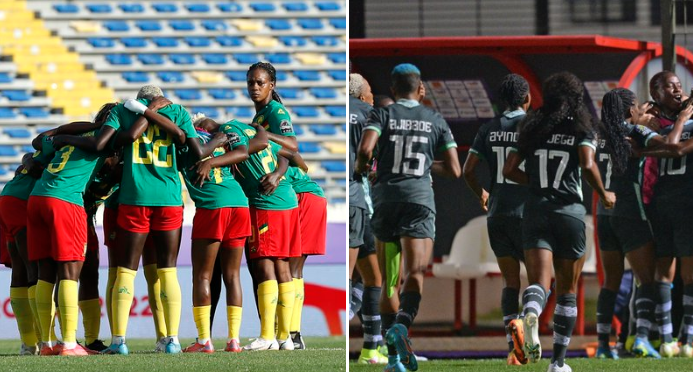 Old rivals, Nigeria and Cameroun have been set up in a crunch quarter-final clash at the ongoing 2022 Women’s Africa Cup of Nations (WAFCON).

In Casablanca tonight, the clash, a repeat of the 2016 WAFCON final, will not just see one of the tournament’s favourites exit this competition and thus miss out on the quest for a medal or the ultimate trophy, but the losers will also miss out on an opportunity to pick one of Africa’s four slots for the Women’s World Cup (WWC) to be co-hosted by Australia and New Zealand next year.

On paper, it indeed looks like the Queens of the WAFCON, Nigeria’s Super Falcons look the favourite to maintain the status quo, having won almost all their encounters, be it at the qualifying, group stages, knockouts or the decisive games, particularly in the WAFCON.

Since their paths first crossed in 1998 at the first continental tournament, the Indomitable Lionesses have never been able to overcome the Falcons, losing nine out of the 10 meetings and their best result being a 2-2 draw in a group stage encounter.

As recently as 2018 in Ghana, the Nigerians, again denied the Camerounians a chance to lift the prestigious trophy when they cut short their dream at the semi-final stage with a 4-2 win on penalties after a goalless drawn game.

In Morocco, while the Nigerians are promising to maintain the status quo, the Camerounians are hoping to change the narrative and have a result that could perhaps, avenge for all the losses and heartbreak they have endured at the hands of the continental mistresses.

Both had a stuttering start, but managed to shrug it and turned things around to progress into the quarter-finals and though they both are yet to show their best, they insist they have done what matters most and would be building on that now that they have reached the crunch knockout stage.

Nigeria will be aiming for their 10th semi-finals from 11 outings, having missed out only at the 2008 edition, with Cameroun setting their sights on a fourth after their wins in 2004, 2014 and 2016.

The Falcons, record WAFCON winner, in Morocco, have had to fight a shaky start and finished as runners-up from Group C, stunned 1-2 to South Africa in their opening game, recovered with a 2-0 win over Botswana in the second game and completed their turn around with a 4-0 victory against Burundi in the final group game.

For Cameroun, having started off with a goalless draw in their opening game against Zambia and then held them to a 1-1 draw in their second game by newcomers, Togo, in a dicey Group B, they had to fight hard to save their campaign and they did so with a gutsy 2-0 win against Tunisia, literally snatching the second group spot from the North Africans.

The star performers for either side have not fully shown up at the party yet, Nigeria’s Asisat Oshoala making an early exit due to injury and Atletico Madrid’s Rasheedat Ajibade, the youngster who thrilled at the 2018 Under-20 WWC and touted as the next goal poacher, is yet to fully step up to the role, though she has two goals to her name and has set up three of the seven goals scored so far.

Ajara Nchout and Gabrielle Ouguene, two of the most experienced players who are both attending their fourth WAFCON, have been missing in action so far, Nchout only with a goal to her game, while CSKA Moscow’s Ouguene is yet to get her name on the scorer’s sheet though the likes of Michaela Abam and Estelle Johnson have.

This fuels the belief that Nigeria, having mastered the craft of winning so far as the WAFCON is concerned, looks poised to win this encounter too and stretch their dominance over their neighbours on the Bakassi Peninsula.

Should the Indomitable Lionesses overcome the Falcons, it will be the first-ever victory in that match up and while that is achievable, it will come over a long 90 minutes for the Camerounians.

South Africa will play Tunisia in the other game, also expected to be won by the Bayana Bayana.

As runners up of the 2018 tournament, South Africa have proved their class with some steady progress and development shown in the way they have performed at this competition, winning all three Group C games, including a 2-1 win against Nigeria.

Tunisia, on the other hand, managed to reach the quarter-finals as one of the third-placed teams after they lost their last Group B game 0-2 to Cameroun, won one and drew one in their group encounters.

Besides, South Africa qualified for the 2019 WWC and they are desirous of returning to the global stage and perhaps, this time, do better than they did in their maiden appearance at the France 2019 tournament.