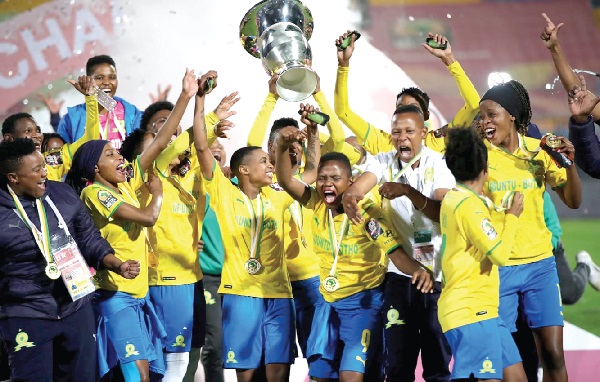 They went, saw but could not conquer as the sun came down on Sekondi Hasaacas Ladies in the final of the CAF Women's Champions League.

They put up a show in the tournament as a high scoring and exciting team but came up short when it mattered most after losing 0-2 to Mamelodi Sundowns in yesterday's final in Cairo.

It was a disappointing end to a roller-coaster run by the talented ladies from Sekondi who extended their domestic dominance to the continental showpiece as they showed that the future of Ghana football was feminine.

Beyond the heartbreak and tears, there were a lot of positives for the Ghanaian champions to build on, as they proved they could compete at the highest level of the game.

Hasaacas Ladies left for Cairo with a mission to conquer Africa and go one step better than the senior national team, Black Queens, who 23 years ago, finished as runners-up in the maiden Africa Women's Cup of Nations and also became the first senior national team to qualify for the 1999 FIFA Women’s World Cup in USA.

They were inspired, worked hard but missed the ultimate reward in Cario. However, they will have their names etched in gold in the annals of women's football in Africa and provide strong reasons to dream big in the coming years, as well as serve as an inspiration for rival teams in Ghana.

It was not a stroll in the park for Ghana's double winners and WAFU Zone B champions who faced the continent's best club sides. They were pooled on a tough group that included AS Mande of Mali (WAFU Zone A champions), Wadi Degla of Egypt and Malabo Kings, champions of Equatorial Guinea and the Central Africa zone.

In Group B was River Angels, WAFU Zone B runners-up and champions of Nigeria; Sundowns, Vihiga Queens of Kenya and Moroccan champions ASFA Rabat, who won the North Africa zonal competition.

It was indeed, a mini Cup of Nations as all the teams indicated they did not only represent themselves, but their countries as well. In the end, it was Hasaacas Ladies and Sundowns, who carried their flags highest and reached the final.

However, when it mattered most, they caved in, failing to provide the needed shine and handing over the ultimate trophy to the South Africans.

Despite their disappointment, Hasaacas Ladies can be proud of their achievement as the first Ghanaian side to be in the inaugural final.

Indeed, they were the first side in Ghana to win the Ghana Women Premier League in 2012/13 and went on to be the first to win the title three times in a row. In the just-ended season, they became the first side to win a double, claiming the league title and the FA Cup title as well.

They extended that feat to West Africa and claimed the WAFU Zone B title which gave them the ticket to be in Cairo.

They have become the first Ghanaian side to play in the final of the first Champions League.

“We are noted for being the first to achieve laurels and, thankfully, that record remains intact. It is a huge responsibility to maintain that consistency and, hopefully, we will be able to achieve that,” Coach Basigi said.

Having achieved this feat, Coach Basigi has added to his credentials as one of the best female football coaches at club and national levels. In 2015, he led the Black Queens to win gold at the All Africa Games in Brazzaville, beating Cameroun 1-0 in that final. A year later, he led the team to again win bronze at the 2016 Africa Women's Cup of Nations staged in Yaounde, Cameroun.

“Despite the disappointment, we can be proud of what we did. There were eight teams that came to Cairo and two got to be in the final," Basigi said.

Believing that the ‘future of the game is feminine,’ as predicted in 1999 by former FIFA President, Joseph Sepp Blatter, the Ghana Football Association is keen to lead the charge, and has made significant investment in developing and promoting the women's game at the grassroots.

Though the Total Energies African Women’s Champions League is an inter-club competition, it is also, by extension, a scorecard for the development and progress of the game in the respective countries. Hasaacas Ladies, four times national league champions, have earned high marks for Ghana, a pacesetter in women’s football on the continent.

And the Chairperson of the Women's Premier League management committee, Mrs Hillary Boaten, summed it up when she said of the team's historic feat in Cairo, “Hasaacas Ladies have provided the shoulders on which the future of women football at the club level rests and will climb higher."