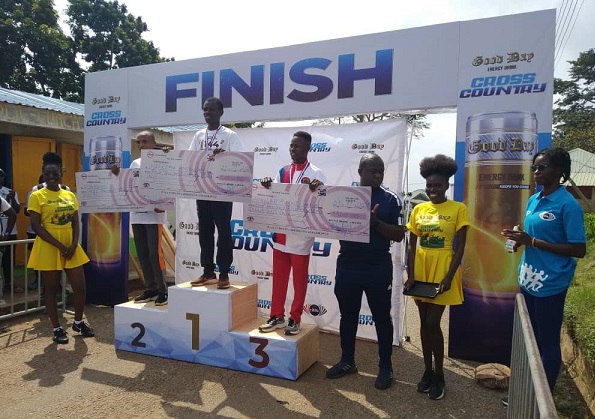 Amponsah, 21, braved the rough nature of the 12-kilometre circuit which stretched along the Berekuso-Ashesi University road and ended at the Peduase Lodge, sprinting to victory at a blistering pace.

He finished in a time of 38minutes and 40 seconds (38.40), over a minute faster than second-placed, Kooga Atia who faded after a bright start, crossing the finish line in a time of 40.10.

The trio was joined on the podium by Awuni Samuel who posted a time of 40.51.

Speaking to the Daily Graphic in an interview after breasting the tape, a confident Amponsah said his major challenge was the rough and hilly nature of the course and not his fellow competitors.

He said his main focus for next year was to make a huge impression internationally by competing in flagship events such as the Boston Marathon.

Lariba was similarly imperious in the women's event, striding home comfortably in a time of 47.47.

Titi Rosina and Sherifa Moro finished in second and third place respectively with times of 52.24 and 53.05.

Lariba, a student at the University of Education said although the nature of the route was a challenge she was adequately prepared after months of training.

She was also hopeful of qualifying for next year's Commonwealth Games after missing out on the 2020 Tokyo Olympic Games in Japan.

Amponsah and Lariba received GH¢5,000 each for winning their races, the runners up in both the men’s and women’s race got GH¢3,000 each and the third-place finishers also received GH¢1,500.

All the other participants received cartons of Good Day Energy, T-shirts, and certificates of participation for their efforts.

On his part, Alexander Botchway, the General Manager of Ocean Merchant, the producers of Good Day Energy Drink said his outfit decided to collaborate with the Ghana Athletic Association on the race as an avenue to unearth more talents for the nation.

He assured that the second edition of the race would be held in March next year.