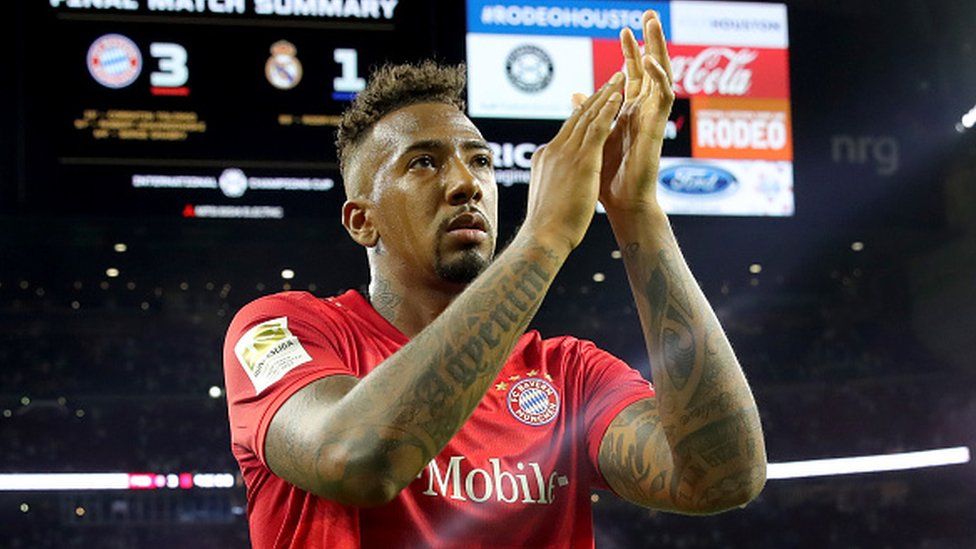 German footballer Jerome Boateng has been found guilty of assaulting his ex-girlfriend, and has been ordered to pay a 1.8m euro (£1.5m) fine.

He had denied injuring the mother of his twin daughters, named as Sherin S, during an argument on holiday in 2018.

She told the court in Munich that the former Bayern Munich defender and 2014 World Cup winner had punched her so hard, she lost her breath for a moment.

In his testimony, Boateng described a different version of events.

Under Germany's domestic violence laws, he could have been jailed for up to five years.

Wearing a dark blue suit, he was escorted by bodyguards as he arrived in court with his lawyer Kai Walden on Thursday morning.

Ahead of the trial, prosecutors accused Boateng of wilful bodily harm, throwing a lamp and a small cooling box at his former partner while holidaying in the Caribbean in July 2018.

Testifying in court, the woman said Boateng had punched her, pulled her hair, bitten her on the head and insulted her during an altercation.

Boateng admitted in his testimony that tensions had escalated during a game of cards, and that they had argued. But he said she had become aggressive and insulting, hitting him and injuring his lip. When he tried to push her away from him, she fell. He said he had thrown a pillow against a table, and the lamp had fallen to the floor.

The hearing had been due to take place in December but was postponed because a witness was unable to appear.

A prominent name in the world of football and on social media, Boateng has had a decorated career for club and country.

He won 22 trophies at Bayern, including the Champions League twice and the Bundesliga nine times, and moved to French Ligue 1 team Lyon on a free transfer in the summer after his contract at Bayern expired.

In February another ex-girlfriend of Boateng, 25-year-old model Kasia Lenhardt, took her own life at a flat in Berlin.

Berlin police found her body in February while Boateng was away playing for Bayern at the Club World Cup in Qatar. Reports in Germany said he had recently ended their relationship.