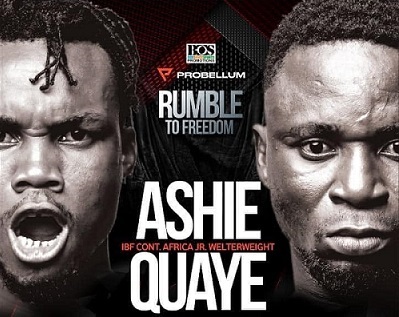 Quaye (20-0, 17 KOs) believes the Independence Day showdown provides him an opportunity to prove himself as the best super lightweight in the country.

The Bukom duo have been engaged in a war of words ahead of their much anticipated IBF Africa championship bout dubbed ‘Rumble to Freedom’.

Whilst Quaye is confident of ending proceedings in seven rounds, Ashie (32-5-1, 24 KOs) wants a win in whichever circumstances.

In an interview with the Graphic Sports, Quaye said he expected a tough contest against an experienced boxer in Ashie when they slug it out on March 6.

“I can promise you that this will be the end of his career because I am going to destroy him in the ring.


“He doesn’t have the strength to match me in the ring because he is old. I am looking forward to fight and I believe it is going to be a tough one,” Quaye said.

Ashie remains one of the top rated boxers locally, having been in the professional ranks for 19 years. The 37-year-old fighter dominated the lightweight division for some time before a controversial majority decision loss to Emmanuel Tagoe in 2012 halted his progress.

However, 10 years after that painful defeat, Ashie is still hopeful of making an impact in the sport by ensuring an emphatic win over Quaye.

“This fight is crucial for my career because I need to win, and I don’t think he has what it takes to beat me.

“The ring will decide but I know I will come out victorious at the end of the fight,” Ashie told the Graphic Sports.