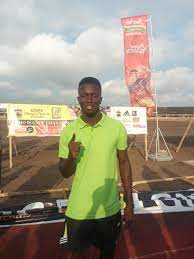 The nation’s top sprinters will converge on the Cape Coast Stadium on Saturday for this year’s GNPC Ghana’s Fastest Human final which will seek for Benjamin Azamati’s successor.

Azamati, who is now an international icon, was discovered at this competition in 2019 when he won the title.
Since then, several others have shown glimpses of replicating his feat, with Barnabas Aggerh being the one likely to succeed him.

This is why Aggerh’s reputation as one of the fastest sprinters on the local scene will be challenged on Saturday.

Aggerh, who ran an impressive time of 10.04 secs to win the regional competition at the same venue in August, will be the main target for the likes of Edwin Gadayi and Solomon Hammond who are also in top form.

But the University of Development Studies (UDS) student, who won the regional meet in 2019, is expected to rely on his experience from the 2022 Commonwealth Games in Birmingham to maintain his dominance on the local scene.

Gadayi is among the few sprinters to have run under 10 secs at the regional meets this season. His record of 9.84 secs at the Paa Joe Park in Kumasi remains one of the best times which he must replicate to be able to unseat Aggerh.

The female category, where Mary Boakye has been the star over the years, is also expected to generate some excitement.

Boakye was able to beat pre-qualifying favourite, Grace Obour, in this year’s meet. However, Obour is also looking forward to the grand finale where she has promised to prove she is ready for the title this season.