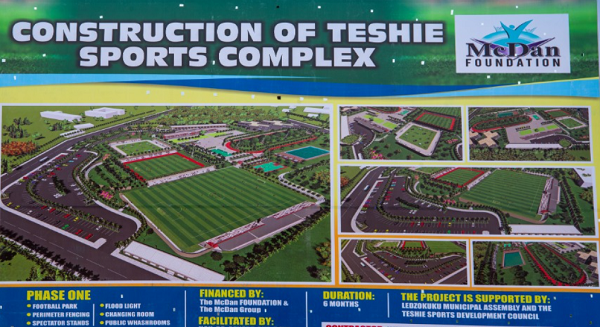 The chairman of McDan Group of Companies, Mr Daniel McKorley says he is excited to be involved with the construction of a $5m multi-purpose sports facility at Teshie.

In a Facebook post hours after the handing-over ceremony to mark the commencement of construction on the Teshie Star Park site on September 15, 2020, Mr McKorley said the project was one of the biggest initiatives of the McDan Foundation.

Coronavirus: McDan Foundation donates 5000 gallons of sanitizers to hospitals, others

He posted: "Excited to see one of our biggest initiatives kick-off. Proud to be part of a brand which works tirelessly to make a positive difference in the lives of children, their families and the communities we serve".

The facility which is being financed by the McDan Foundation and the McDan Group is to be named the Teshie Sports Complex when it is completed.

According to the contractors, the first phase which includes an astroturf football park, perimeter fencing, spectator stands, floodlights, changing rooms and public washrooms is to be completed in six months.

The project is being facilitated by the Member of Parliament for Ledzokuku, Dr Benard Oko-Boye with support from the Ledzokuku Municipal Assembly and the Teshie Sports Development Council.

The McDan Foundation has also constructed a similar facility at La which is christened the 'McDan La Town Park' which is a venue for matches in the National Women's League.