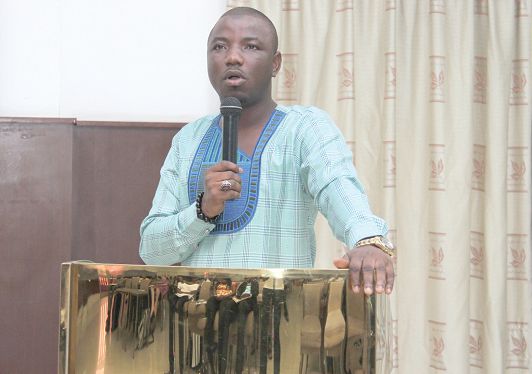 A Senior Lecturer at the Department of Political Science of the University of Ghana, Legon, Dr Seidu Alidu

A Senior Lecturer at the Department of Political Science of the University of Ghana, Legon, Dr Seidu Alidu, has stated that a unified front of Nkrumaist parties will give Ghana a third force heading into the 2024 general election.

According to him, the country was currently yearning for a dominant third force and if parties that professed the ideologies of Dr Kwame Nkrumah were to unite successfully, they could occupy that position.

"It is baffling that parties which profess the ideologies and vision of Dr Kwame Nkrumah are not able to win elections in this country and one of the identifiable challenges has been the fact that these parties are scattered across the length and breadth of the country," Dr Alidu told the Daily Graphic yesterday in an interview.

"So it is an ideal thing to seek unification, especially if they all believe in the same core principles espoused by Dr Kwame Nkrumah. I think that Ghana is yearning for a dominant third force besides the National Democratic Congress (NDC) and the New Patriotic Party (NPP) and collectively if the Nkrumaists front can unite, it can occupy that position.

"Over the years, the third force has either been PPP, PNC or CPP except for this last election that we had Ghana Union Movement (GUM). If these smaller parties which have been outperforming each other for the third position come together, you will see that they will become a very big force for people who are not happy with the NDC and the NPP," he stated.

A new political pressure group, United Nkrumaist Front (UNF), has been formed in Sunyani with the aim to unite all the fragmented Nkrumaist parties under one umbrella to contest the 2024 general election.

In line with that, a six-member interim executive of the UNF, with Alhaji Mustapha as chairman, Mr Michael Nketiah as secretary and Mr John Alagba as the spokesperson, was introduced to the gathering.

Dr Alidu said the latest effort by a new political pressure group, the United Nkrumaist Front (UNF), to unite the Nkrumaist parties would only be successful with compromise and consensus among the parties involved.

He indicated that past efforts had been thwarted by minor issues such as the symbol, name and leader of the new unified party and major issues such as interference from the two major political parties.

"In a merger and coalition of political parties, usually the smaller party joining the bigger one adopts the name of the bigger one collectively but this is the case they all have relative strength and have all been the third force at a point in history, so whose name and symbol would be used? If they are not able to decide on that, it becomes a minor issue and compared to interference from the two major political parties,” he stated.

He said both the NPP and the NDC retained an interest in the activities of smaller parties so that in the event of run-offs they could fall back on them for support during elections and at the Inter-Party Advisory Committee (IPAC) of the Electoral Commission (EC).

Dr Alidu said all the minor issues affecting the unification of Nkrumaist parties could be addressed if they were able to wean themselves off "the continued deliberate dominance by the NDC and the NPP.”

He suggested that the leaders of the unification effort could achieve their objective by addressing issues of the independence and funding of the merged entity.

"There should be compromises and consensus, especially with regard to leadership. The most important thing is how they will fund this new party. Once they are able to wean themselves off the little freebies coming from the NDC and the NPP, they will become attractive to the floating voters who are tired of the NDC and NPP and these persons will contribute dues towards running the party," Dr Alidu stated.