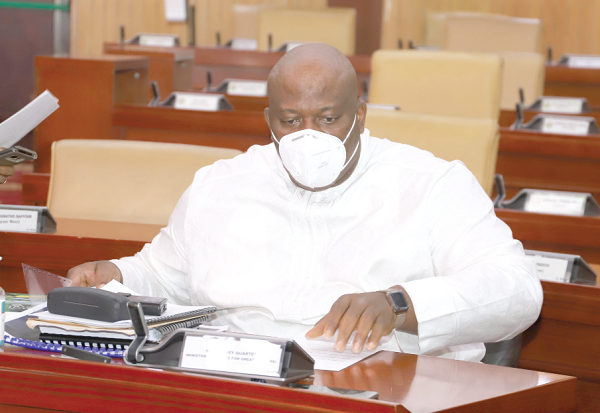 The Greater Accra Regional (GAR) Minister designate, Mr Henry Quartey, has expressed his readiness to go all-out to work with various stakeholders in the land acquisition sector to address the threats land guards pose to legitimate landowners in the capital city.

He said he would collaborate with the Ministry of Lands and Natural Resources, Lands Commission and the various traditional councils and landowners in the capital city to stop the multiple sale of lands that had spurred the activities of land guards.

“Once given the nod, we will engage stakeholders, especially traditional councils and landowners, to ensure that as much as possible the multiple sale of lands are reduced in order to revive the confidence in the land acquisition system,” he said.

Taking his turn before the Appointments Committee hearing yesterday, Mr Quartey told the committee that already the minister-designate for Lands and Natural Resources had expressed his commitment to tackle the canker, while the Lands Commission had also commenced the digitisation of the processes of land acquisition.

“It is my hope and prayer that they will be able to expedite action on the processes of land acquisition and when that is done, it will reduce the issue of land guards and the multiple sale of land.

The nominee stated this after the National Democratic Congress (NDC) Member of Parliament for Bodi, Mr Sampson Ahi, asked him what he would do as the chairman of the Regional Security Council (REGSEC) to minimise the activities of land guards, which posed security challenges in the capital city.

He spent time answering questions pertaining to reducing political violence and crime in GAR, teaching of Ga language in public schools, views on moving regional capital to Dodowa, curbing the spread of COVID-19 in Accra, ending perennial flooding and coastal erosions, improving sanitation and job creation, among others.

Mr Quartey acknowledged that the issue of lang guards remained a serious challenge in the capital city due to the multiple sale of lands.

He also blamed the cumbersome processes of land acquisition which, he said, did not give the people the confidence to “go and wait for documents to be prepared before he or she goes in to build.”

On what steps he would take to reduce crime in the capital, the nominee said issues of crime across the country were matters that remained the concern of citizens

He, therefore, pledged to leverage the security experiences he gained from the Interior and National Security ministries to work with the members of REGSEC and other stakeholders to minimise crime in the region.

He showed the committee a document, titled “Let’s make Accra work again”, which, he said, contained issues of security, sanitation, fight against COVID-19 which he would implement to make Accra safe and clean.

Responding to questions on what measures he would institute to restore the teaching of Ga language in public schools in Accra, Mr Quartey said he would personally lead the cause to work hand in hand with the Ghana Education Service (GES) to ensure that Ga language remained in the syllabus of schools as well as ensure enough teachers of Ga to teach the language.

“When given the nod, I will collaborate with the Minister of Education and the GES to ensure that the few teachers that we have to teach Ga do so and we will call on other opinion leaders to support the teaching of the language,” he said.

On the question of whether the regional capital should be moved to the traditional capital of Dodowa, Mr Quartey acknowledged that moving the capital from Accra to Dodowa was a good idea.

He, however, urged Ghanaians to take cognisance of the financial challenges that might come with doing so.

“Because of urban drift, if you move your capital just as has been done in Nigeria where the capital has been moved from Lagos to Abuja it is a wonderful idea but it involves a lot and Parliament must be involved so we can begin the process”, he said.

In a bid to ensure cleanliness and improved sanitation in the capital, the nominee said when approved, he would kickstart a project to introduce dustbins across the region, starting first with two constituencies.

Under the project, he would collaborate with the various metropolitan, municipal and district assemblies as well as corporate bodies and transport unions to support the people to clean their surroundings on last Saturdays or Sundays of every month.

He further touted his readiness to stop the abuse of sirens which had become a security concern in the Greater Accra Region, a move he claimed would not “sound too sweet in the ears of my colleagues.”

“When given the nod, I will ensure that the abuse of sirens in Accra and the use of blue lights will be minimised and this is one of the innovations I will bring to the region.

“As chairman of the REGSEC, this has to be stopped and we will do it. Now the President has made his representation in the region and this is one of the innovations I will bring to make Accra work,” he said.