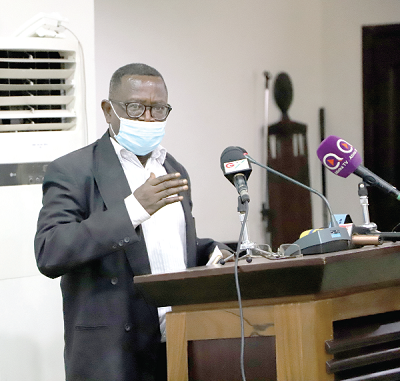 The Institute for Democratic Governance (IDEG) has said that no attempt should be made to stifle media freedom in the country.

That was because attempts to consistently put limitations on the media could affect the country's ranking on the media landscape world wide.

A Senior Research Fellow at IDEG, Mr Kwesi Jonah, said that in an interview with the Daily Graphic yesterday on the sidelines of a media interaction by the Civic Forum Initiative, a coalition of civil society organisations in Accra.

Mr Jonah said that in reaction to a recent statement issued by the Judicial Service of Ghana for the media to be measured in the reportage of the ongoing 2020 presidential election petition.

It expressed concern about what it said were publications of incendiary, hateful and offensive statements against the seven Justices of the Supreme Court hearing the petition.

It, therefore, directed that the publications of such content should cease.

But at a news conference in Accra, the Ghana Journalists Association called on the Judicial Service to avoid developments that tended to instill fear in the media and promote the culture of silence.

It, therefore, demanded the withdrawal of a letter from lawyers of the Judicial Service to media houses ordering them to delete certain publications or risk appropriate action.

Mr Jonah said it was important for all Ghanaians to support media freedom and “to oppose any decision or any measure that restricts media freedom”.

“The media have a responsibility and would do self-censorship. If you are a media person and the feedback you are getting all the time is negative, then you must know that something is wrong.

“But to make laws to police the media is not acceptable,” he said, adding that “that is why we have regulatory bodies that should deal with such a matter and not the government”.

Mr Jonah said being an arm of the state, the statement from the Judicial Service was like the state trying to put restrictions on the operations of the media and that if such a statement had come from the National Media Commission (NMC) he would not have worried.

“That is why I am worried when an arm of the state is perceived to be trying to place unnecessary limitations on the freedom of the media”.

The IDEG position, he said, was that nothing should be done to undermine media freedom.