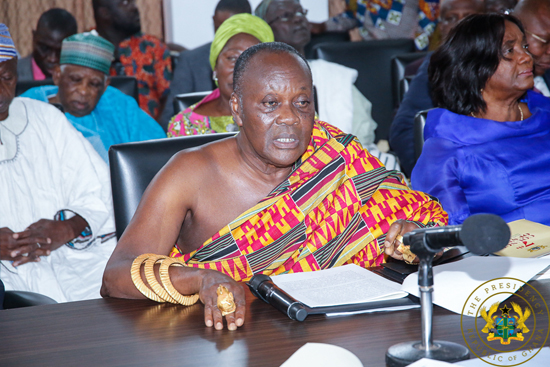 Members of the Council of State have begun a three-day working tour of the Western Region as part of an initiative to get feedback from the grassroots to help them appreciate the issues on the ground and inform their work as advisors of the President.

The tour, intended to be a period exercise and extended to other regions, is also to help in carefully addressing issues at the decentralised level in the regions.

While in the Western Region, the delegation, led by its Chairman, Nana Otuo Siriboe II, who is also the Omanhene of New Juaben, visited the T3 Thermal plant site at Aboadze, the GNPC operational headquarters site in Takoradi and the gas processing plant site at Atuabo.

The team is expected to also undertake field visits to illegal mining sites to apprise themselves of the devastating effects of the menace on the environment, especially forest reserves and water bodies.

Also, they will hold interactive sessions with members of the Regional Coordinating Council, Metropolitan, Municipal and District Chief Executives.

In a brief remark on arrival at the Airforce Base in Takoradi, Nana Otuo Siriboe II explained the need to engage the various regions to better appreciate their development aspirations, concerns and challenges.

That, he indicated, would better position the council to advise the government in real-time on concerns bordering on social, economic, security and other pertinent issues of national interest and development.

"As advisors of the President, we don't want to give armchair advice. To help do a very good job, we want to gather as much information as possible on matters on which we wish to advise the President on to enable us to proffer the requisite counsel.

“And that can only be done when we find time to engage regional leaders and communities for the best advice to the government," he emphasised.

Welcoming the Council of State delegation to his region, the Western Regional Minister, Mr Kwabena Okyere Darko-Mensah, who met them at the airport, said he was grateful for the visit and commended them for the initiative.

He informed the delegation that the region was embarking on a number of development programmes to improve living conditions.

He also alluded to the menace of illegal mining and unemployment, matters of concern not only to the region but the country at large.

Under the chairmanship of Nana Otuo Siriboe II, the Council of State has adopted a policy to engage relevant stakeholders on issues that are of importance to the nation and its citizens.

Last month, the council held a meeting with stakeholders over the steady rise in the prices of goods and services in the country with the view to helping find a solution to the issue.