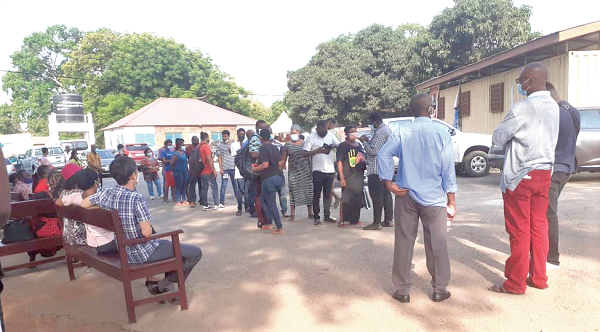 A health worker at the Adabraka Polyclinic taking down the names of some of the people while others wait for the vaccination on benches. Picture: EDMUND SMITH-ASANTE Follow @Graphicgh

There was a mad rush to vaccinate against COVID-19 at the Adabraka Polyclinic in Accra on Friday.

Besides being an international inoculation centre, the Adabraka Polyclinic is also a designated centre for COVID-19 vaccination.

An anxious crowd had began forming on the compound of the health centre as early as 4 a.m. in readiness to take their jab which was scheduled to start at 8 a.m.

An elderly man who said he was at the centre at 4:30 a.m. and was third in a queue formed, intimated that the two persons ahead of him had arrived much earlier.

As people continued arriving before the scheduled time, it took one person’s forethought to start giving out numbers to everyone coming for the jab in order to bring some orderliness to the fast-gathering crowd.

However, a health worker who was not pleased that an individual was issuing out the numbers said he (the person) had not been authorised to do so and what he was doing was rather going to create confusion.

The people around, however, jumped to the defence of the issuer of the numbers who gave his name as Li, stating that the issuing of the numbers was rather bringing order to the place.

The health worker, whose name was only given as Sammy, explained that some people by virtue of their age or other considerations may not be required to join the queue, which might not be understood by others and which was why he was against the issuance of numbers.

The crowd nonetheless said in unison that they understood protocol and would not stand in the way if an elderly person was made to take the shot before those deemed younger or stronger.

When asked what influenced him to start issuing out numbers on papers, Mr Li told the Daily Graphic that he decided to do so because he realised there were not enough benches for everyone.

“I saw that the benches were not enough for everyone and people did not have a place to sit and the place was getting disorderly,” he said.

True to what he anticipated, although there were inscriptions (don’t sit here) on the few benches indicating the need for physical distancing, within no time, that was ignored as people started filling the deliberately created spaces on the benches with one excuse or the other.

The anxiety of the crowd got to fever pitch when at the scheduled time, vaccination had still not started and people in the gradually extending queue became agitated.

“If there will be no vaccination today, they should just tell us so we leave,” “If there is any problem, they should at least communicate to us,” some in the crowd said as they grew impatient.

Meanwhile, as of 8 a.m. there were over 100 people at the centre, which clearly did not allow physical distancing.

The vaccination finally began at about 9:30 a.m. with the explanation that there were only about 50 doses of the AstraZeneca vaccines available and so more had to be fetched from a nearby facility so there would be no break once the exercise started.

Indeed, taking the shot only took a few seconds when vaccination got underway, with a health worker calling out 15 people at a time to have the injection administered by only one person.

The whole process, however, took longer than was expected, also heightening tension when people tried to jump the queue.

After taking the jab, the vaccinated had to wait in another queue for personal details such as name, residence and contact number to be captured electronically via a phone and small tablet by two health workers.

About 200 people were expected to be vaccinated by the close of day yesterday at the health facility.