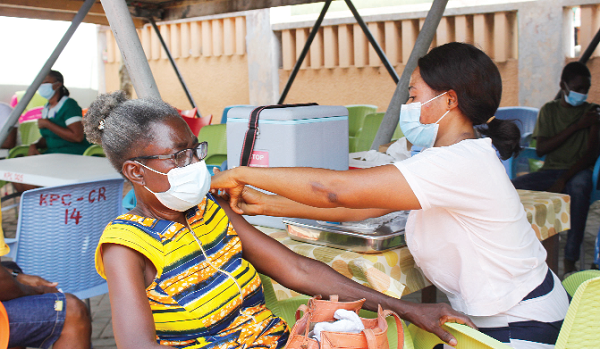 Enthusiasm for COVID-19 vaccines is steadily growing among the public in parts of the country, the Daily Graphic has observed.

At the Kaneshie Polyclinic, many patrons were anxious to be vaccinated because the vaccines allocated for the day were almost exhausted.

The team also observed that the situation where vaccinators sat at the centres without anybody going to them to be vaccinated was gradually becoming a thing of the past.

Speaking with the Daily Graphic, the Head of Disease Control at the Okaikwei South Sub-Metro, Ms Priscilla Kyerewaa Twumasi, said within one week, the sub-metro had administered over 1,000 doses, as against an average of 50 doses a week previously recorded.

She explained that the rush to get vaccinated could be attributed to what people stood to lose if they failed to avail themselves of the jabs before January next year.

Based on the Public Health Act, 2012 (Act 851), the Ministry of Health (MoH) has come up with a mandatory vaccination policy which will come into force in January next year.

Its implementation will start with selected groups of people and patrons of selected events and venues.

“People are afraid of being denied access to certain venues, services, workplaces, among others, so they are rushing to take the vaccines,” Ms Twumasi said.
The MoH has indicated that there are enough vaccines to protect the population from COVID-19.

The government has declared this month vaccination month to make vaccines available and bring them closer to the public.

The Ghana Health Service (GHS) hopes to use the vaccination month as a platform to increase public awareness of the importance of vaccines.

It said it had stocked more than enough vaccines to get close to 20 million of the population vaccinated by the close of the year.

From Ho, Jemima Achivors writes that health centres in the Volta Region are recording impressive turnouts for the vaccination.

The regional capital, which used to record 20 people daily going for vaccination, is now seeing an average of 70 people going for jabs a day.

The officer in charge of the exercise at the Ho Municipal Hospital, Mr Daniel Asare, described the numbers as impressive, saying more than 2,000 people were being targeted for vaccination at the facility this month.

He said the increase in the number of patrons was a testament to a new awakening, especially the discovery of the new variant of the COVID-19, the Omicron.

The Ho Teaching Hospital is also recording over 70 people daily at the facility for vaccination.

Over a million residents of the Volta Region who are eligible for the COVID-19 vaccines are being targeted for the intervention ahead of the Christmas festivities.

The officer in charge of the exercise at the Ho Teaching Hospital, Mr Benjamin Narkorli, told the Daily Graphic that the process, although smooth, was facing some challenges.

He indicated that some eligible individuals were developing cold feet towards the vaccine, which was worrying.

"Some people do come, and after educating them, they change their mind and tell us they have not prepared their mind for the vaccine, and they just go away," he said.

He advised the people to endeavour to get the vaccine in order for the region to attain herd immunity.

Biiya Mukusah Ali reports from Sunyani that the vaccination programme is receiving high patronage, especially among the youth.

As of 12 noon yesterday when the Daily Graphic visited the Sunyani Municipal Hospital and the Bono Regional Disease Control and Surveillance Unit (DCSU) vaccination centres,