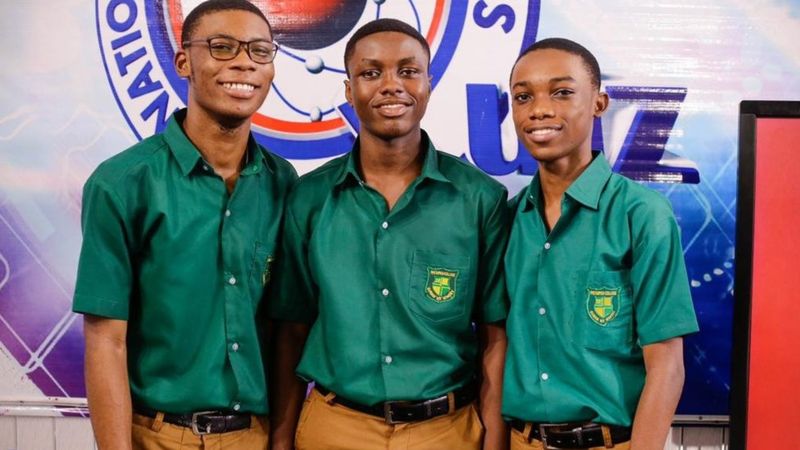 Prempeh College has won the 2021 National Science and Maths Quiz (NSMQ), to bring their championship tally to five.

They won with 53 points as against 49 points by the Presbyterian Boys' Senior High School, Legon (PRESEC.)

It was the first time KETASCO was reaching the final stage of the competition.

KETASCO earned GH¢3000 as their prize money from Absa Bank as bronze winners.

PRESEC, Legon did very well and was close but it was not their year, said the Quiz Mistress, Prof Elsie Kaufmann when she announced the final results.

Prof Kaufmann congratulated the PRESECANS, who were hoping to win the trophy for the seventh time in line with their slogan, “We are ‘SEVEN’ a living God".

As silver medalists, their prize money is GH¢4900 from Absa Bank. PRESEC is still in the lead for winning the contest six times.

Prempeh College currently occupies the second position on the table of schools with the most wins, having won the competition five times as against PRESEC's six.

As champions for 2021, Prempeh College gets the prize money of GH¢5300 from Absa Bank and an additional GH¢10,000 from Prudential Bank and the NSMQ star with the highest scorer from AirtelTigo.

There are other prize monies for the contestants and special awards.

In addition to the top prize money, Prempeh won the 'Jama' prize as the best school in the 'Jama' competition.

From Kumasi, Graphic Online's Kwadwo Baffoe Donkor reports that the boys from Sofoline raised their voices high as they won the competition.

It was host and win for the Prempeh boys, commonly referred to as 'Amanfoo' who from the beginning of the competition said they were going to paint the city green by winning the trophy and present it to the Asantehene, Otumfuo Osei Tutu II.

As expected, it was a two horse race between Prempeh College and PRESEC who were the defending champions as the first time finalists, KETASCO could not soar.

The God of ‘1onders' from the Oti and Volta Zone champions made history as first timers in the final but could not make history with a win.

PRESEC, the defending champions made their intention known to retain the trophy when they won the first, second and third rounds of the competition.

In the first round PRESEC opened a one point lead between them and the eventual winners and increased to five in the second round.

The gap was however narrowed to two points in the third round.

Things however changed in the fourth round when Prempeh got all their answers right and got two riddles right in the final round to increase their tally to 53 points.

PRESEC however, lost two points in the fourth round when they got two answers wrong and as the rules of the game, a team loses a point when they get the answer wrong in that round.

At the end of the contest, Prempeh had 53 points and went home with GHC10,000.00 as the highest scorer of the night from AirtelTigo and also won the Prudential Life NSMQ star prize by scoring 10 points in the third round.

PRESEC had 49 points to place second with KETASCO coming third with 30 points.

For their efforts, Prempeh College took home the coveted trophy and a cash of GH¢80,000.

All the three finalists had massive support from their old students who made the journey to the Great Hall of KNUST to give their school enough morale to perform.

KETASCO had support from other schools other than their own school.

Of course being on home ground, Prempeh College had the largest support as their students and old boys were there in their numbers and kept the hall lively with their ‘Jama’ songs.

The Asakyerehene, Nana Prof Mensah Bonsu, who represented the Asantehene, Otumfuo Osei Tutu II, said while Science and Maths were considered to be very difficult subjects, the quiz has demystified it and made it easy for students and also engendered interest in the subjects.

He commended the organisers for sustaining the students in the programme all these years.

He called for a collaboration between the Otumfuo Foundation and the programme to promote education in Ghana.

The Managing Director of Primetime Limited, organsers of the quiz, Nana Akua Ankomah-Asare was grateful to the Asantehene, Otumfuo Osei Tutu II and the managers of the city of Kumasi for the warn reception to the team.

While commending the public particularly the fans of the quiz for their loyal support throughout the event, she asked them to be kind the contestants in their comments and posts on social media.

She said “we the organizers of the NSMQ and stakeholders have zero tolerance for any form of bullying, particularly cyberbullying or face to face bullying.

“Let us not subject these young, intelligent individuals to digital abuse,” she urged.

Speaking on behalf of the Director General of the Ghana Education Service (GES), the Director of Science Education at GES, Ms Olivia Serwaah Opare said NSMQ was the longest running independent production on TV in the country and has over the years generated interests amongst students and their old students.

This she said also inspired the study and learning of  Science, Technology, Engineering and Mathematics (STEM) in schools.

She said the service has over the years supported the programme as it fell in line with its agenda to STEM and to train the inventors and innovators of tomorrow.

She said GES would continue to support the programme to promote STEM among learners.