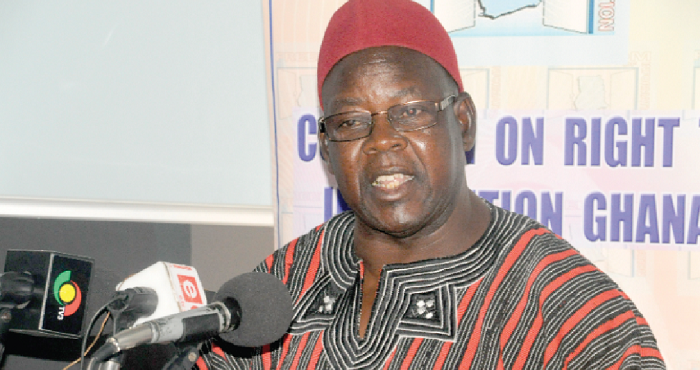 The coalition on the right to information has called on Parliament to pass the Right to Information (RTI) Bill  before the 2016 general election in December.

It argued that the passage of the bill was long overdue and should, therefore, not be used as another political message during the elections as it had been the case since 2008.

The two major parties in the country, the National Democratic Congress (NDC) and the New Patriotic Party (NPP), have both been accused of reneging on their pledges.

The bill, when passed into law, would, among other things, empower the people to demand for accountability and promote access to information that could help curb corruption.

At a press conference in Accra last Thursday, a co-chair of the coalition, Mr Vitus Azeem, said the current government and Parliament had, on many occasions, promised to either pass the bill or prioritise its passage but all to no avail.


Some members of the coalition present at the press conference were clad in red attires to express their disappointment with the government and the MPs for the delay and appealed to President Mahama to use his executive powers to engage Parliament to pass the bill into law.

The bill, which has over the years been worked on by the Attorney-General’s department, Parliament’s select committee on constitutional, legal and parliamentary affairs and the coalition on the right to information, among other bodies, was currently awaiting its second reading and passage by the august House.

For instance, Mr Azeem indicated that the NDC in their manifesto in both 2008 and 2012 promised to pass the RTI when they got to power.

In 2011, he added, the government signed onto the Open Government Partnership Initiative and made similar commitments to lobby and engage Parliament to pass the RTI Bill by the end of 2013.

In June this year, Mr Azeem further stated, the Deputy Attorney General, Dr Dominic Ayine, at the 117th session of the UN Human Rights Committee in Geneva, said the RTI Bill would be passed by July 22, 2016.

In addition, he said the Speaker of Parliament, Mr Edward Joe Adjaho, promised to prioritise the passage of the bill at the beginning of this sitting, but “he seems to have lost interest”.

Mr Azeem  noted that the bill was last discussed on June 23, 2016 and that civil society could not fathom why there were still delays in its passage.

The co-chair wondered why Parliament had passed some bills under certificate of urgency to serve the interest of the executive but were failing in their responsibilities to fast-track the passage of the RTI bill.

“Failure to pass the bill this year will mean that the government cannot be trusted, in spite of its proclaimed commitment to fighting against corruption,” he stated.

The head of legal and administration of the Trades Union Congress, Paapa Kwasi Danquah, said “the credibility of the President  on corruption will be in doubt if he doesn’t push for the RTI bill to be passed.”

The President of the Ghana Journalists Association, Mr Affail Monney, urged the media to champion the passage of the RTI bill to facilitate their work.