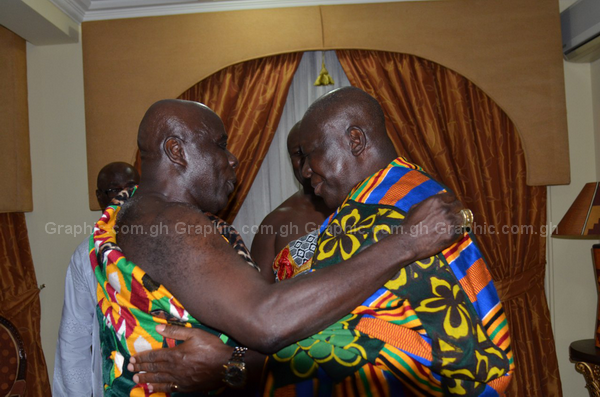 The perceived between the Asantehene, Otumfuo Osei Tutu II, and the Okyenhene, Osagyefuo Amoatia Ofori Panin, gave way to affection and goodwill when the two traditional rulers had some historic engagements in Kumasi last Saturday

a move that was enthusiastically welcomed by observers, the two performed a joint tee off in the second Head of State Invitational Golf Tournament and, in the presence of President Nana Addo Dankwa Akufo-Addo, sat at a common table for the first time at a dinner gala at the Manhyia Palace to lower the curtains on the golf tournament.

Recently, the Asantehene accused some government officials, believed to be Akyems, of leading a crusade to bring the Golden Stool into disrepute.

President Akufo-Addo had to move to Kumasi to hold a meeting with the Asantehene following the Otumfuo’s outburst.

At the golf course

It was a sight to behold when the two traditional rulers stormed the Kumasi Royal Golf Club last Saturday morning, holding hands, for the historic tee off.

They arrived together in Otumfuo's sleek limousine and proceeded to the course, where they hugged each other and laughed before teeing off, to spontaneous applause from the gathering.

In his statement at the dinner gala that lasted about five minutes, the President said all traditional rulers, including the Asantehene and the Okyenhene, were crucial to the development of the country.

He then led the charge onto the dance floor, followed by some important players from Asanteman and Okyeman, including the Finance Minister, Ken Ofori-Atta, and the Majority Leader in Parliament, Osei Kyei-Mensah-Bonsu, to dance the night away.

In a speech, the Okyenhene said: “We are different people, belonging to different stools, but it is more important to be a Ghanaian.”

“We believe in the traditions that brought us up and want to uphold them as we have done. We just don’t want to remain traditional rulers but contribute to the development of the country,” he added.

Besides, they ascended their stools at the same age and had both lived outside the country, he noted.

“I am bringing out all these to show that we are one,” he said.

The Okyenhene said history was being made because checking from his records, it was the first time a President, the Okyenhene and the Asantehene had met at the same time.

He said it was also the first time he was officially visiting the Manhyia Palace.

He commended the President for a number of initiatives, including the free SHS and his vision of moving the country beyond aid to become the shining star of the continent.

“This country can no longer remain here. We cannot continue to beg for food. That is why all of us need to support the President as he strives to move us beyond here,” he said.

However, he said for Ghana to grow, there was the need to include traditional rulers in how it was run.

Osagyefo Ofori Panin said it was time to make the policy more meaningful by making the people at the sub-governmental level take charge of their own destiny.

“Our children should be able to say that they feel good about themselves but they feel better about their country,” he said.

The Asantehene did not speak at the dinner but applauded each statement made by the Okyenhene.

The two played over two holes in the one-day 18-hole competition meant for business executives and captains of industries.

At least 150 amateurs took part in the tournament, which is on a rotational basis.

The next tournament will be held in the Western Region.

At the time of going to the press there were reports that the convoy of the Okyenhene, Osagyefo Amoatia Ofori Panin had been involved in an accident at Osino, along the main Kumasi-Accra Highway Sunday afternoon.

Eyewitnesses said a tipper truck run into the last vehicle in the convoy, forcing it off the road. The Okyenhene was returning to Kyebi after attending a meeting in Kumasi with the Asantehene.