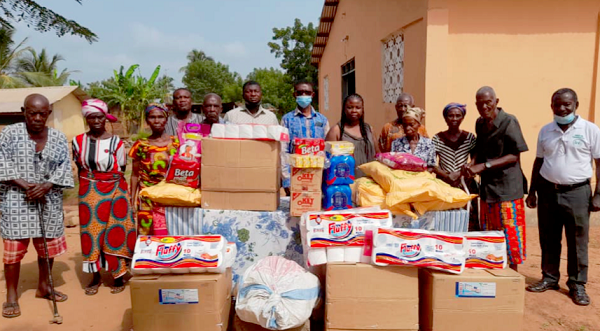 Mr Blessed Ayisi (standing middle) with some of the elderly after the donation. With him are officials of the church and the NGO.
30.5k Shares

Onua Pa Foundation, a non-governmental organisation (NGO), that promotes better care for the elderly, has donated items to some elderly women and men in the Asenema and Krutiase communities in the Okere District in the Eastern Region.

The donation, which included food items, toiletries and used clothing also saw some caregivers as beneficiaries.

Sponsorship for the donation was provided by friends of the foundation.

The Chairman of the foundation, Mr Blessed Ayisi, advised the youth and the elderly to form community-based groups in order to support themselves without waiting for external assistance to solve their problems.

The Catechist of the Krutiase Presbyterian Church, Mr Edmund Amoah, who received the items on behalf of the beneficiaries, commended the foundation for extending its gesture to the people of the two communities.

He gave an assurance that the foundation would reach all the vulnerable in the villages whether they were present at the function or in their respective homes.