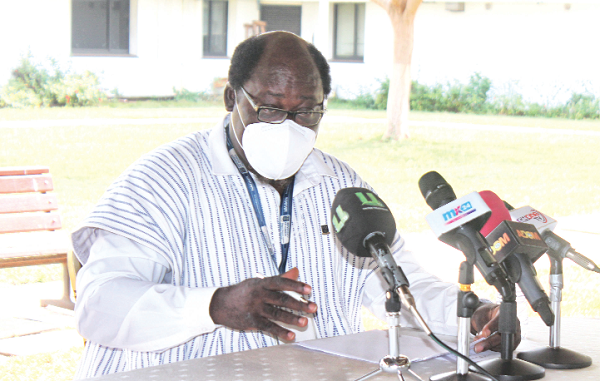 An investigation conducted by the National Intelligence Bureau (NIB) and the Noguchi Memorial Institute for Medical Research (NMIMR) has shown that no COVID-19 test result was falsified at the institute in January this year.

According to the investigation, there was no evidence in the claim by a Ghanaian resident in the United Kingdom (UK), Mr Kofi Acheampong, that he paid money to get his positive COVID-19 test changed to negative.

The Director of the NMIMR, Professor Abraham Anang, disclosed this at a press conference in Accra yesterday to announce the outcome of the investigation conducted by both the institute and the NIB.

He said on January 15, this year, the NMIMR of the University of Ghana received reports of the circulation of an audio recording on social media from an individual (Acheampong) alleging that he was requested by British Airways (BA) to obtain a COVID-19 test result for his travel to the UK.

Mr Acheampong, he said, visited the institute on January 10, this year to take a COVID-19 test which turned out positive when he returned to collect the results on January 12, this year.

"He (Acheampong) alleged that at about an hour after taking the test result, he received a phone call from someone at NMIMR who informed him that the positive result could be changed to negative for a fee of GH¢500 to enable him to travel to the UK.

"The individual further alleged that he went back to the NMIMR where he was issued with a negative COVID-19 test result after paying the agreed fee," he said.

Prof. Anang said Mr Acheampong further claimed that after arriving in the UK, he took another COVID-19 test on January 13, this year, just three days after the test at the NMIMR, and it turned out negative.

Mr Acheampong subsequently "accused the institute and its staff of falsification of test results and exploitation of clients for monetary gains".

Following the allegations, the institute, in consultation with the University of Ghana, set up a five-member committee on January 16, this year to conduct internal investigation, while the NIB took up the matter for investigation.

The director of the institute said the sample was processed through COVID-19 testing processes and it showed positive.

The Prof. Anang indicated that a report dated January 12, 2021 was prepared by the institute’s Data Processing Unit which was verified and signed by the supervisor on duty, Dr Helena Lamptey.

The director said, however, that there was no evidence in the NMIMR data and reporting system for the generation of another report (negative) for Mr Acheampong.

"Without giving credence to the supposedly UK NHS negative COVID-19 result that was also circulated on social media, we would like to state that scientifically, it is possible for a person to test positive for COVID-19 and convert to negative status within a few days.

"The technical data from Mr Acheampong's COVID-19 test gave a cycle threshold (ct) value of 36.12 which suggested that his viral load was low or he was on the path to recovery," he said.

Prof. Anang said the five-member committee worked by listening to the audio, examined accompanying images, identified and interviewed a number of key staff involved in the COVID-19 testing process at the institute.

The committee, he said, also walked through the various COVID-19 processing stages and traced the reference sample of Mr Acheampong from the registration of the client to the point of result collection, adding that the committee extensively examined all documentation relating to the process.

"Investigations revealed that contrary to claims by Mr Acheampong, he neither received a phone call from anyone at NMIMR promising to change the test results at a fee nor did he return to the NMIMR after he left the place on January 12, 2021," Prof. Anang added.

Prof. Anang said the claim by Mr Acheampong that he conducted a COVID-19 test on January 13, 2021 in the UK could not be immediately verified.

"Several phone discussions with Mr Acheampong, who is in the UK, to get him to assist with the investigation proved futile as on each occasion, he indicated he would prefer his lawyer to speak on the issue.

“He, however, failed to honour his many promises to provide the phone contact of the said lawyer," the director indicated.

The NMIMR added that one Mr Amoako, who came with Mr Acheampong from Kumasi and was with him throughout his stay in Accra prior to his departure to the UK, had declared as "untrue the allegation made by Mr Acheampong that he acquired a falsified negative COVID-19 test result to enable him to travel to the UK".