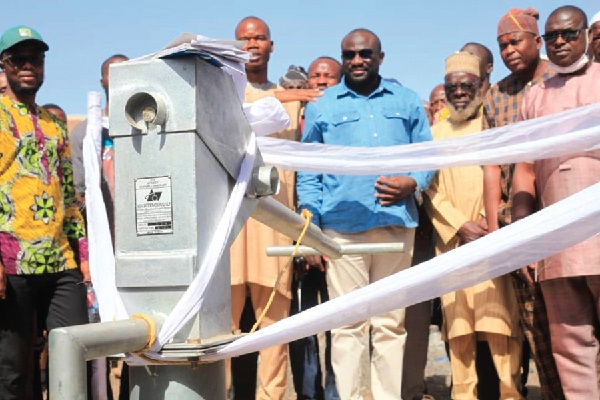 Mr Hanan Abdul-Wahab (arrowed), the NAFCO CEO inspecting one of the boreholes at Pusiga Follow @Graphicgh

The Chief Executive Officer (CEO) of the National Food Buffer Stock Company Limited (NAFCO), Mr Hanan Abdul-Wahab, has initiated a number of development projects in the water and road sectors in the Pusiga District in the Upper East Region.

The projects include the upgrading of seven kilometres of selected town roads at Widana, near Pulmakom and Pusiga, all in the district, and the provision of 30 borehole facilities valued at GH¢600,000 for selected communities in the district.

Additionally, the CEO donated 2,000 plastic chairs to be used in selected chiefs’ palaces and churches in the area.

The package also included the presentation of 200 bags of cement to support the construction of a new Catholic Church building at Pusiga.

The projects were all financed by a non-governmental organisation (NGO), Alhaji Hanan Foundation, previously called Aludiba Foundation, owned by the CEO.

At a durbar of the chiefs and people of Widana, Mr Abdul-Wahab assured them of more projects towards the accelerated development of the Pusiga District.

He also pledged to support assembly members to develop their respective communities to help reduce poverty among the people, particularly the youth.

The CEO said he was happy to have fulfilled his promise of providing the people with the boreholes following an appeal they made for potable water.

The Chief of Widana, Naba Asurugu Alale Ibrahim, and the secretary to the Pusiga Chief, Mr George Atusei, both expressed gratitude to Mr Abdul-Wahab for his development initiatives, describing him as “a good and illustrious son of the Pusiga area".

Mr Atusei, for instance, mentioned in particular, the CEO’s donation of three ambulances to the area to help deal with emergency health issues, as well as other interventions.