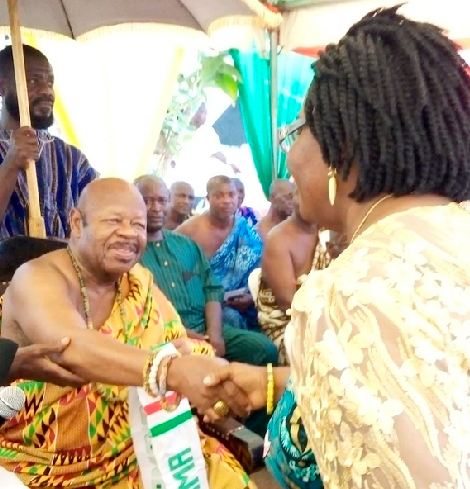 The Manya Krobo Traditional Council in the Eastern Region has honoured two “Ideal Women” known in Dangme as Yokama who distinguished themselves in the development of the traditional area.

They are Mercy Tettey and Joyce Nyaunu, also known as Joyce Atieku.

The honours were conferred on them during this year’s annual Ngmayem festival of the people of the traditional area.

Ms Tettey, a native of Manya Krobo Traditional Area but currently domiciled in Australia, single-handedly constructed a borehole for the Tsredorm community in the Lower Manya Krobo municipality and also built teachers bungalow which accommodates all the nine teachers for Tsredorm Municipal Assembly Basic School.

Mrs Nyaunu, the wife of the former Member of Parliament for Lower Manya Krobo Constituency, Michael Teye Nyaunu, hails from Peki Avetile in the Volta Region, but served the Manya Krobo Traditional Area and the Lower Manya Krobo Municipality as a teacher for 36 years.


The Konor of Manya Krobo and the current President of the Eastern Regional House of Chiefs, Nene Sakite II, instituted the Yokama Day (Ideal Woman Day) celebration in 2003 to honour and empower hard working and courageous women of the area as role models foryoung ones.

This year’s festival was dubbed: “A Time for togetherness”.

Presenting the awards, Nene Sakite lauded the Yokamas for distinguishing themselves for the development of the Manya Krobo Traditional Area and the Krobo community at large.

“Since the institution of Yokama Day in 2003, all the Ideal Women lived up to expectation and usefulness in whipping support for development in our communities,” Nene Sakited stated.

The Konor was, however, not happy with the rate of teenage pregnancies in the area and the upsurge of HIV/AIDS infections in the Eastern Region and the country at large.

He, therefore, cautioned the youth to eschew actions that were detrimental to their development of the area and the nation.