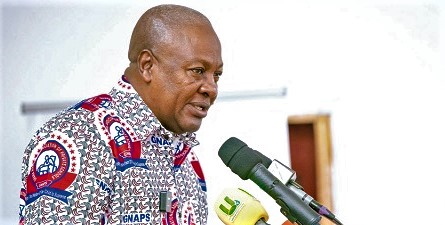 Former President John Mahama has urged private schools to reposition themselves to harness the benefits of the digital revolution.

He said exploring the digital transformation in education was the way to go, since it enhanced teaching and learning in a highly competitive global economy.

The two-day conference was on the theme: ‘’Repositioning private schools in the era of digital growth’’.

The former President also charged the leadership of GNAPS to internalise principles underlying digital-indexed pedagogy and also demonstrate a practical commitment to the advancement of e-teaching and e-learning.

“Private schools have expanded access to education, deepened quality and depth and provided alternatives in our national agenda to ensure that no child is left behind in obtaining adequate knowledge and skills in this increasingly competitive world,” he said.

On the free SHS, Mr Mahama expressed concern about the policy underpinnings of the government towards its implementation, including the introduction of the double-track system.

He said although the double-track system was a mechanism to manage increasing student enrolment, its effect on the education of students due to reduced contact hours and more leisure time without supervision was a disincentive to quality teaching and learning.

According to the former President, there were many existing private SHSs with facilities that could have been used to avert the immediate infrastructural deficits that the system had brought about in public schools.

He said there were also experts and stakeholders who were willing and prepared to put their wealth of experience and knowledge at the disposal of the government to resolve the challenges bedeviling the free SHS policy, but the government was demonstrating a lukewarm attitude towards such suggestions because “politics might have taken a better part of the government”.

According to the former President, there was a convergence between social democracy and private sector participation in education.

He said it was for that reason that the National Democratic Congress (NDC) considered private schools as complementary in enhancing equitable access to opportunities for all.

Mr Mahama further stressed the need to build a solid foundation on child education at the basic level.

"This is where we must get it right and I, therefore, challenge you the private schools to place the primary school level at the centre of your strategic repositioning agenda,’’ he added.

The President of GNAPS, Dr Damasus Tuurosong, who spoke on a number of issues affecting the association, said state institutions which were supposed to support private schools in the heat of the COVID-19 pandemic rather failed them.

“Instead of assisting us to brave the storm of economic hardship as private schools, some state institutions are worsening our plight through their actions and inaction, pronouncements and deliberate sabotage,” he claimed.

Mr Tuurosong further alleged that the Ministry of Education had, in many instances, ignored private schools in its activities to promote quality education, adding: “This is a clear discrimination against private schools.”