Supreme Court to give presidential election dispute judgment in 42 days 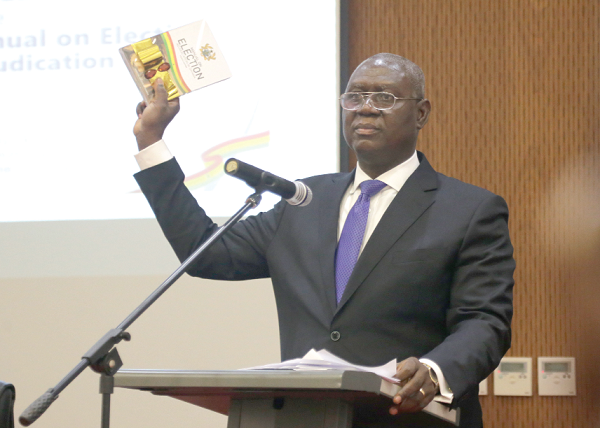 Any electoral dispute that will arise from this year’s presidential election will be determined by the Supreme Court within 42 days.

Again, only the declared winner of the presidential poll and the Electoral Commission (EC) can be respondents to a presidential election petition.

This is a major departure from the 2013 presidential election petition filed by then candidate Nana Addo Dankwa Akufo-Addo, which travelled more than eight months and which had the National Democratic Congress (NDC) being allowed to join as a respondent.

The Chief Justice, Justice Anin Yeboah, said the new amendments to the Supreme Court Rules were meant to guide the apex court to expeditiously deal with electoral disputes.

“The amendment to the Supreme Court Rules, effected by the Supreme Court (Amendment) (No 2) Rules, 2016 (C.I. 99), has introduced strict timelines for the management and hearing of presidential election disputes which require the court to determine any such disputes on the 42nd day after its filling,” he said.

Justice Anin Yeboah was speaking in Accra yesterday when he launched the fourth edition of the manual on election adjudication in Ghana.

The launch was attended by the Deputy Chairperson of the EC in charge of Corporate Services, Dr Bossman Asare, Justices of the Superior Courts, representatives of the political parties and the security agencies, a representative of the Attorney-General and traditional leaders.

The manual is a reference point for all electoral laws in the country, as well as court decisions on electoral disputes.

The manual was first introduced for the 2008 elections by the then Chief Justice, Mrs Justice Georgina Theodora Wood, and has subsequently been revised and updated in every election year, taking into consideration changes in electoral laws and new court decisions on electoral disputes.

The fourth edition was put together by a committee chaired by Justice Jones Dotse, a Justice of the Supreme Court.
Other members of the committee were Justices Nasiru Sule Gbadegbe, Samuel Marful-Sau, Clemence Jackson Honyenuga, Tanko Amadu and Emmanuel Yonny Kulendi, all justices of the Supreme Court; Justice Sir Dennis Adjei, Justice of the Court of Appeal; Justice Samuel Boakye Yiadom, the Second Deputy Judicial Secretary, and Mrs Gifty Yeboah Preko Nyarko, the Deputy Director in charge of Judicial Reforms and Projects at the Judicial Service.

Apart from the new amendments to the Supreme Court Rules, other updated information in the manual includes the Public Elections (Registration of Voters) Amendment Regulations (C.I. 126), which makes the Ghana Card and the passport the only acceptable legal documents required for one to register as a voter, and this year’s Supreme Court decision that upheld C.I. 126 and the EC’s constitutional mandate to compile a new voters register.

“The two appendices dealing with the applicable laws and processes covering pre-election activities have also been revised to keep pace with changes in the law, including applicable decided cases of the superior courts,” the Chief Justice added.

Justice Anin Yeboah said elections were the bedrock of the country’s democracy and, therefore, all stakeholders, including the Judiciary, must play their roles in a fair and transparent manner to promote the interest of the country.

“The fair determination of electoral disputes by the Judiciary serves the purpose of electoral integrity. Without such an assurance to the contestants, disputes that arise after elections may end up on the streets, resulting in violence,” he said.

He gave an assurance that the Judiciary would discharge its duty in a fair and transparent manner, and also in line with the law.

“While not everyone will agree with all our decisions, I can assure you that they have all been motivated by the national interest, underpinned by firm judicial principles, geared towards preserving the sanctity of the Motherland,” he added.

Justice Dotse lauded the members of the committee for their tireless efforts, dedication and sacrifices which helped the team to meet its deadline.

He said the manual was written in an easy-to-read format to help guide all stakeholders involved in elections.

“The verdict will come from you judges, lawyers, key stakeholders, such as political parties, CSOs, the media, election management bodies such as the EC, whether or not the fourth edition of the manual has met your aspirations,” he said.