President Nana Addo Dankwa Akufo-Addo on Tuesday inaugurated the first phase of the Obetsebi-Lamptey Interchange in Accra, 11 months after he had cut the sod for work to begin.

The project, which was completed five months ahead of schedule, involved the construction of two (5 x 2 metre) 550-metre viaduct and ramps between the Graphic Road and the Dr Busia Highway (Kaneshie-Mallam Road). 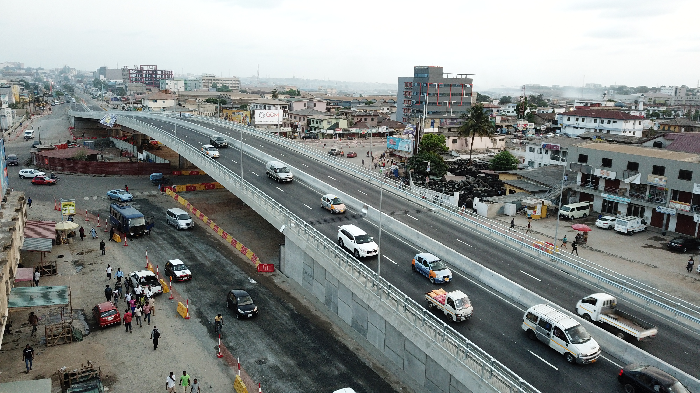 There are also a box culvert across the Graphic Road and a storm drain up to the Ring Road West carriageway.

The storm drain, which will help address the flooding challenges experienced at the previous Obetsebi-Lamptey Circle, will be continued up to the Mpamprom Junction under Phase II of the project.

The project was executed by QGMI Construcciones E. Infraestructuras Globales S.L.U., with FAS Consult Ltd as the engineer’s representative, while the Department of Urban Roads (DUR) is the agency under the Ministry of Roads and Highways responsible for the project.

Under Phase Two, which begins immediately, the third tier of the interchange, which will be on the Ring Road West (Awudome to the Central Mosque at Abbosey Okai), will be constructed.

Additional works to be undertaken include the widening of the Ring Road West (from Awudome Junction to the interchange) into a 2 x 3 dual carriageway and the improvement of the Awudome Road and the Nii Teiko Din Street.

President Akufo-Addo, who inaugurated the project as part of his two-day campaign tour of the Greater Accra Region, said the completion of the first phase would allow the contractor to commence work on Phase Two immediately.

He explained that the completion of Phase One was an indication of the seriousness the government attached to addressing the problem of congestion on the roads.

The President said currently, five interchange projects were ongoing in the country.

“This is the first time in our nation’s history that more than five interchanges are being constructed within the first term of any government, so if there are any reasons to give Nana four more years to do more for, this is one of them,” President Akufo-Addo added.

These, he said, included the completion of 1,000 asphalt overlay works throughout the country, the LEKMA road, which is 90 per cent complete, and the construction of the Tema Steel Works road, the first concrete road constructed by the government after the Accra-Tema Motorway, which was now about 90 per cent complete.

He explained that Kumasi roads and drainage extension projects, including the dualisation of the Lake Road and the lining of the Seaside road in Kumasi, were in progress.

The President said the Ministry of Roads and Highways, through the DUR, was reviewing proposals to address the challenges on the Kaneshie-Mallam Road.

“This is necessary to reduce the discomfort commuters go through at the Kaneshie Market area, the First Light Intersection and the Sakaman-Mallam section of the road,” he said.

The Minister of Roads and Highways, Mr Kwesi Amoako-Atta, said the construction of the interchange became necessary to eliminate one of the major bottlenecks on the Ring Road in Accra — congestion — and improve traffic flow at the intersection in four major roads, made up of the Graphic Road, the Kaneshie-Mallam Road, Ring Road West towards the Nkrumah Interchange and Ring Road West Extension towards Abbosey Okai.

He said all road works started from last year would come with covered drainage systems.

He added that there would also be the erection of an appropriate monument in memory of Emmanuel Odarkwei Obetsebi-Lamptey, one of the Big Six of Ghana’s independence struggle, after whom the interchange is named.