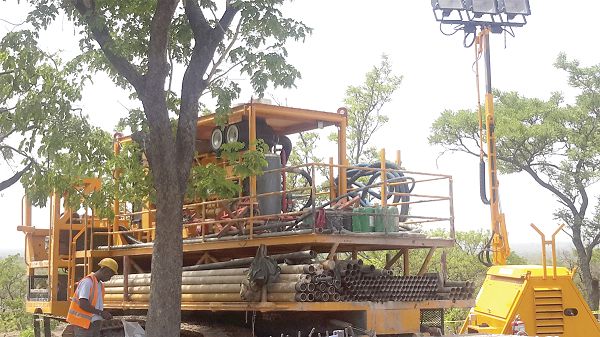 The Azuma Resources Limited, an Australian company prospecting for gold in the Upper West Region is set to start surface mining for gold by next year.

This follows feasibility studies on its prospecting and exploration stages carried out in the area since 2006, when the company entered the region in 2006 and focused on the exploration for gold.

With a mining licence from the Minerals Commission, Azuma Resource Ltd has now been offered specific concessionary areas in Kunche-Bekpong in the Nadowli-Kaleo District and Julie near Danyorkura in the Wa East District.

With the aid of the services of Geodrill, an exploratory company, Azuma Resources Limited has drilled several holes into their concessions and extracted the deposits, analysed them and established that the two sites in the Nadowli-Kaleo and Wa-East districts possess gold mineral in commercial quantities.

Conducting the Daily Graphic around the two sites, Mr Jonathan Hunt, the Exploration Manager of Azuma Resources Ltd, said the company adopted the name Azuma from the renowned Ghanaian World Super Feather Weight Champion, Azuma Nelson who won the title bout after knocking down their compatriot Jeff Fenech in Australia many years ago.

He noted that at the moment the company was not making any profit from their activities but rather invested a lot of resources which has yielded the results they were expecting.

For instance, he said, the company pays the government $38,000 every year for prospecting and each hole drilled by Geodrill cost  about $90,000.

Mr Hunt said the aim of the company was to eventually establish a goldmine in the region.

“At the moment, we are just going to start with surface mining which will cover about 750 metres deep, but when we detect that there are more gold deposits beyond 750 metres deep, then we shall do underground mining,” he said.

Mr Hunt said the company’s activities so far have been funded by its shareholders and investors in Australia.

He said over the years the local people did not understand the activities of the company, insinuating that they had been shipping gold ore mined in the area away from the country.

According to him, what they saw was rather the rock and soil samples being sent to Tarkwa in the Western Region for analysis and not gold, adding that at Tarkwa, those samples were analysed to determine their mineral contents.

He explained that the prospecting or exploration stage was capital-intensive and the period could last for about 18 years for final determination.

“The only thing we have done was to construct roads to our project sites and we pay compensation for crops that we destroyed along the way.

He said when mining operations started, the company would cede 10 per cent of its profit to the government, pay 35 per cent as corporate taxes and royalties of five per cent to the land owners.

He said they hoped to start work after obtaining their final permit from the government by the end of October this year.

At the moment, they have 54 permanent employees and 35 casual with 73 per cent of them from the region.

Mr Hunt indicated that even though the company was not making any profit now, it was executing its corporate social responsibilities to the region.

The company has so far bought medical beds, valued at GHC44,000 for the Nadowli Government Hospital, dug boreholes in Nanga, Tankasie, and Yiziiri at the cost of GHC72,000, rehabilitated a classroom block at Takpo and provided it with a borehole at the cost of GHC36,000.

Furthermore, the company refurbished the Kalsegra Health Centre and provided a resident bungalow for a health assistant and five semi-detached nurses’ quarters, supplied school bags and school materials for 18 basic schools, including Mamwe, Bussa, Bulinga, Chagu in the sum of GHC12,000, and sponsors a 120-member cycling club annually.

In addition, Azuma Resources Limited has trained selected women in dry season farming and provided them with alternative livelihoods skills. They have also supported the Farmers Day celebrations, the Centre for National Culture (CNC) and the Regional Coordinating Council.

According to Mr Hunt, the region stands to benefit when the mining operations officially starts.

“This is when heavy duty trucks and machines to convey the ore will be visible, offices and residential accommodation will be constructed and more people will be employed with the multiplier effect resulting in businesses springing up all over the region, This will head to a buoyant hospitality industry, market other commercial ventures,” Mr Hunt stated.

He added that the mining operations will lead to transfer of technology to the local people in mining.

The company, he said, which was the first mining company in the region would work very closely with the traditional authorities and planned to set up  a Community Relations Unit to foster good relations with the people.