210 Participate in malaria screening at Ve-Deme 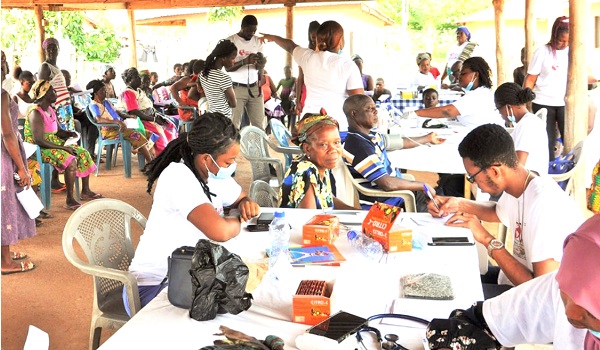 About 210 people at Ve-Deme in the Afadzato South District in the Volta Region last Saturday took part in a malaria screening exercise to mark World Malaria Day.

Thirty of them who tested positive to malaria were treated during the six-hour exercise which took place at the town square.

It was organised jointly by Accra-based mosquito repellent manufacturers, EXA Ventures, and the Queen of Tsowu-Afede clan of Ve-Deme, Mama Afiakumah II.

“This is to create awareness of the need to prevent malaria and also treat it promptly to promote productivity in the community,” the Chief Executive Officer (CEO) of EXA Ventures, Madam Doris Adoboe, said.

She stated that the exercise would be sustained and extended to as many communities as possible in the region.

For her part, the Facility Head of the nearby Ve-GHAD Health Centre, Madam Victoria Selorm Addo, said the rising trend of malaria in the area was disturbing.

She stated that the health centre which attended to Gbodome, Hoeme, Agbome and Deme, recorded a total of 4,070 cases of malaria last year and had already recorded 350 cases in January and February this year.

Madam Addo attributed the high incidence of malaria in the area to the refusal of many residents to sleep in the treated mosquito nets which were made available to them.

“Some people even use the nets to fence their gardens,” she said.

The facility head said malaria topped the 10 most prevalent diseases in the area, with urinary tract infection, mild anaemia and intestinal worm infection following in that order.

Mama Afiakumah entreated the people to test for malaria willingly and regularly to stay healthy to produce and earn abundantly in their various income-generating activities.

“If we are down with malaria, we cannot rise up for our farm activities and other livelihoods, and so let us all take a firm stance to keep malaria away,” she urged.

Mama Afiakumah advised the people to maintain a high standard of sanitation in their neighbourhoods to avoid the breeding of mosquitoes.

The organisers and the medical team of the exercise later embarked on a door-to-door visit to homes in the community to treat bedridden malaria patients and distribute treated mosquito nets to them.