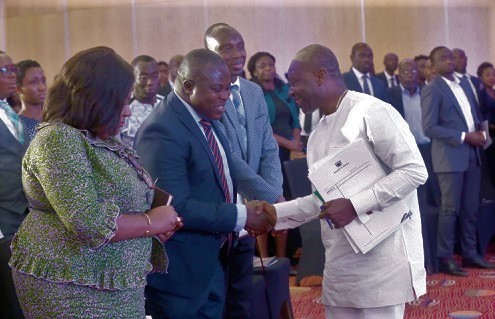 The Minister of Finance, Mr Ken Ofori-Atta, has assured the public that the 2020 budget, with a projected expenditure of GHc85.9 billion, is purposeful and achievable.

He said the government would take bold steps to mobilise the needed revenue and also remain resolute in making critical investment choices that would propel economic growth and promote national development.

"We will remain committed to making bold choices.

The choice of funding free senior high school (SHS) is a difficult task for some people, but we remain resolute to do so because investment in human capital is a critical issue; the choice to have a Fiscal Responsibility Act imposed on oneself was difficult but it had to be done and boldness was key; the financial sector issues that we are confronted with had to be done too.

We will continue on this bold path to build a strong economy," the minister added.

Mr Ofori-Atta gave the assurance at a budget forum organised by KPMG, an auditing firm, in Accra last Monday, at which some economists raised critical issues about the strengths and lapses in the economic policies of the government and made recommendations to improve the system.

The economists included a tax consultant at Ali-Nakyea and Associates, Mr Abdallah Ali-Nakyea; a member of the Monetary Policy Committee of the Bank of Ghana, Dr John Kwakye; the Vice-President of the Association of Ghana Industries (AGI), Mr Humphrey Ayim-Darke, and a partner at the Tax Unit of KPMG, Mr Kofi Frempong-Kore.

They raised concerns over weak revenue mobilisation regimes and advanced the argument that aggressiveness was required by the government to generate more taxes.

Besides, they called for a critical look to be taken at tax exemptions and said the government should dwell more on capital expenditure, rather than recurrent expenditure.

Additionally, the economists said linkages should be created among government flagship programmes such as Planting for Food and Jobs (PFJ), One-district, One-factory (1D1F) and free SHS to make the programmes more impactful on the people.

Mr Ali-Nakyea, for instance, said there was the need for reforms in revenue mobilisation to ensure a more coordinated approach by state institutions.

He said the introduction of withholding taxes on Value Added Tax (VAT), in particular, was not a good approach to revenue mobilisation.

"Most countries are doing away with withholding tax on VAT, but Ghana has introduced it.

I think this is a lazy approach to raising tax because it is the duty of tax administrators to assess and collect the tax, but they are shifting it to taxpayers to do it," he added.

He also called for a review of the tax audit system and regular monitoring of activities of businesses to rake in more revenue.

Dr Kwakye asked that priority be placed on reviewing the tax exemptions policy in the interest of the country.

"We are losing about GH¢5 billion in exemptions.

The law has been laid before Parliament to address this but it is not being passed," he said, adding that steps must be taken to plug revenue losses through illicit financial flows, misinvoicing and other bad practices.

Mr Frempong-Kore urged the government to ensure that the bill on tax exemptions before Parliament was passed to help review exemption regimes in the country.

For his part, Mr Ayim-Darke asked the Ghana Revenue Authority (GRA) to deploy innovative systems to enforce compliance, while calling for more to be done to expand the tax net to include other sources of revenue.