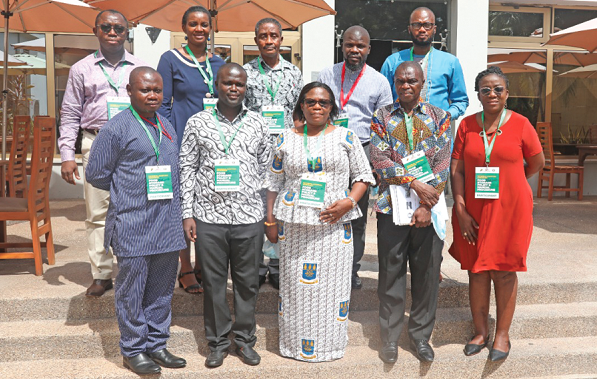 • Mr Amatus Deyang (2nd right), Director of Agriculture Engineering of the Ministry of Food and Agriculture, with some of the participants

The food crisis that hit West Africa in 2008 highlighted the need to strengthen the emergency food security reserves at national and local levels and to create a solidarity mechanism at the regional level.

This led to the creation of the Regional Food Security Reserve (RFSR) on February 28, 2013 in Yamoussoukro, Cote d’Ivoire, by ECOWAS Heads of State at their 42nd Ordinary Summit.

In February, this year, stakeholders from member countries met in Accra at a workshop to discuss and validate a National Food Storage policy and procedure manual.

The formulation of the policy and manual will feed into implementations of food security storage strategies which will require designated warehouses to hold the reserves under best practices known in the industry.

The workshop, which was on the theme: “Towards a sustainable food security in the sub-region”, and hosted by the National Food Buffer Stock Company (NAFCO), provided a platform to create awareness of the project and to solicit stakeholders’ perspectives on the issues.

After a successful incorporation of the comments and feedback from stakeholders in the February workshop, the last workshops were held on May 27 and 28, 2021, for technical adoption and political engagement respectively as the final stage of the acceptability of the two draft documents, with immense input from Dr Robert Aidoo of the Faculty of Agriculture of the Kwame Nkrumah University of Science and Technology (KNUST) as the lead consultant.

Similar workshops have been held across the sub-region to adopt a country-specific policy.

The draft policy for the country, which reached its final stage of adoption, recognises the need for structures and is therefore, in accord with the complementarity and solidarity principles of the RFSR, which requires of ECOWAS member states to have locally held stocks as first line of defense and national stocks as second line, after which the regional body will intervene to support in the event of food crisis.

The draft policy document sees the Ministry of Food and Agriculture playing the lead role in the implementation and setting up of the initial platform and structures for implementation.

Presently, NAFCO seems well positioned to be the lead body under the yet to be operationalised Network of National Companies in charge of the Management of National Food Security Stocks.

The proposed implementation plan for the inventory and management procedure manual is prepared under the assumption that NAFCO will anchor the process.

Currently, the NAFCO, the institution with the mandate to manage government’s emergency food security reserves in the country, holds the RFSR at its 2,300 metric tonnes capacity storage warehouse at Yendi in the Northern Region at the behest of RAAF.

At the technical adaptation, Dr Aidoo believed that even though the country had been storing food items in warehouses and stores, such a policy was crucial to ensure standards and best practices within the ECOWAS sub-region.

He said an efficient post-harvest handling, storage and distribution system was needed to bridge the gap between food surplus and food deficit regions in the country, explaining that the policy had been developed through a consultative and participatory process to provide a broad framework to address food storage and distribution challenges currently facing the country.

Opening the technical adoption workshop, the Director of Agriculture Engineering of the Ministry of Food and Agriculture, Mr Amatus Deyang gave the assurance that the government remained committed to ensuring food adequacy and would, therefore, continue to implement programmes and strategies in that regard.

Quoting the Food and Agriculture Organisation of the UN, he said currently, there were  256 million hungry people in Africa, though many of the countries were making progress towards reducing malnutrition and addressing food security challenges to meet the 2030 SDG targets.

“Innovative projects are being put in place to address issues such as climate change, interrupted food supply systems and numerous threats to food production,” he said.