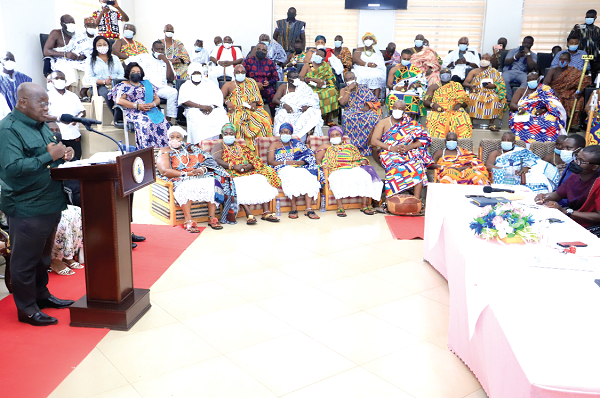 The Greater Accra Regional House of Chiefs has thrown its weight behind security agencies, charging them to deal with persons who stir up trouble in the region in the name of chieftaincy.

It said such people should be dealt with according to the Chieftaincy Act 759 of 2008 since their actions could not be chieftaincy offences but criminal offences.

“It will interest you to know that aside from people filing petitions to challenge the status of chiefs, these same people go round installing rival chiefs, a situation which is a recipe for disaster.

“We urge the security personnel to deal with persons who will foment trouble in the region in the name of chieftaincy. There are no chieftaincy offences but criminal offences and such people should be dealt with according to the Chieftaincy Act 759 of 2008,” Nii Welentsi stressed.

The Vice-President of the House, King Odaifio Welentsi III, who made the call in an address to welcome President Nana Addo Dankwa Akufo-Addo to the house at Dodowa last Saturday, pointed out that the house was currently faced with 26 chieftaincy cases out of which 10 were resolved last year.

The situation, he explained, was affecting the effective judicial and administrative work of the house because only six out of the 13 traditional areas were currently represented in the house.
Nii Welentsi said the Greater Accra Regional House of Chiefs was becoming non-functional due to lack of members and described the situation as one that made the running of the house difficult.

He was, however, grateful to the security heads for their role in maintaining the peace in the region in spite of its "numerous chieftaincy issues.”

King Welentsi thanked President Akufo-Addo for his commitment towards the Free Senior High School (FSHS) which, according to the House of Chiefs, had taken many brilliant, needy students off the streets.

He said the FSHS policy would change the phase of the society and the next generation.

He futher asked that Nation Builders Corps (NABCO) trainees be absolved into the various sectors as permanent staff.

Nii Welentsi, on behalf of the Regional House of Chiefs, also reiterated its call to change the name of the region from Greater Accra to Ga Dangme Region to reflect the views, status and aspirations of the people.

The house also declared its stance on the subject of the activities of people indulging in same sex marriage and said "as fathers of the land we have monitored the social and public discourse and we want to add our voice that this practice will not be entertained or tolerated among the people.”

“Mr President, all eyes are looking up to you for you to do the needful to help save humanity, “it added.
The house further asked that works on the eastern corridor road be enhanced.

The visit to the Greater Accra Regional House of Chiefs last Saturday by President Akufo-Addo was the last lap of his nationwide working tour.

The President had just completed a visit to the Central Region and began a three-day tour of the Greater Accra Region.

It has become the habit of President Akufo-Addo to visit parts of the country to know how the business of government was going and also listen to the people about the governance of the country.

He has so far toured 15 regions this year.

President Akufo-Addo urged the traditional leaders to expedite action on resolving the various chieftaincy cases, saying the resolution of chieftaincy matters contributed to the peace and stability of the country.

He assured the house that the government would do its part to facilitate that process to make it possible for the full complement of the house.

The President also used the opportunity to thank the people of the Greater Accra Region for their support for him and his political party during the last elections albeit some setbacks but said with their support it would be corrected in 2024.

On the matter of the change of name from Greater Accra to Ga Dangme Region, President Akufo-Addo said it would be considered and assured the chiefs that he would soon make his response known to them.

He debunked the assertion that work had halted on the eastern corridor road and said considerable advances had been made to the road since he assumed office. The President, therefore, assured the chiefs that the road would be completed before the end of his tenure.

Responding to the issue of the LGBTQ+, President Akufo-Addo expressed the hope that Parliament would deal with it in a satisfactory way.
President Akufo-Addo also visited the construction site of the interchange at the Nungua barrier which is part of the Accra Intelligent Traffic Management Project to acquaint himself with the progress of work.