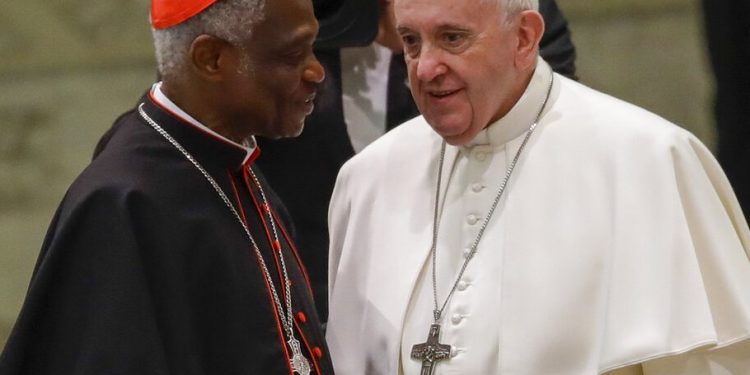 Ghanaian Cardinal Peter Appiah Turkson, in the wake of a media report suggesting that he has abruptly offered to resign from a key Vatican department has put out a tweet saying he is waiting for "new action of [the] Pope".

On Saturday [Dec 18, 2021], Reuters reported that Cardinal Peter Appiah Turkson, seen by some as a candidate to become the first African Pope in about 1,500 years, has abruptly offered his resignation from a key Vatican department, sources familiar with the matter said.

Turkson, 73, from Ghana, has been a key adviser to Pope Francis on issues such as climate change and social justice, and is the only African to head a Vatican department.

"InVatican mandates of Office-Heads expire at death/resignation of Pope or expiry of 5yr term of office. One surrenders mandate for Pope/new Pope to renew/extend mandate or reassign. Turkson surrendered in 2013 Francis renewed 5yr mandate in 2016. Now must awaitnew action of Pope!"

InVatican mandates of Office-Heads expire at death/resignation of Pope or expiry of 5yr term of office. One surrenders mandate for Pope/new Pope to renew/extend mandate or reassign. Turkson surrendered in 2013 Francis renewed 5yr mandate in 2016. Now must awaitnew action of Pope!

Reuters reported that Vatican sources, who spoke on condition of anonymity, said the pope has yet to decide whether to accept the resignation.

Turkson heads a large Vatican department known as the Dicastery for Integral Human Development. It was formed in 2016 to merge four offices that dealt with issues such as peace, justice, migration, and charities.

One source said Turkson, who is about two years shy of the mandatory retirement age of 75 for bishops, had become "fed up" with internal disputes.

Another source said Turkson had told staff he would say more after the pope made his decision. His departure would leave the Vatican with no African heading a major department, following the retirement of Cardinal Robert Sarah of Guinea earlier this year.

Turkson's department underwent an external review headed by Cardinal Blase Cupich of Chicago at the pope's request earlier this year.

His offer to resign follows two high-level departures from the department over the summer, one because of retirement and another sudden and unexplained.

The Catholic Church had several popes of north African origin early in its history, the last in the 5th century.

Even if he leaves his Vatican post, until he turns 80 Turkson would still be eligible to enter a conclave of cardinals to elect the next pope after Francis dies or retires, according to Church rules.

Turkson's decision to offer his resignation was first reported by the conservative Italian blog messainlatino.it. 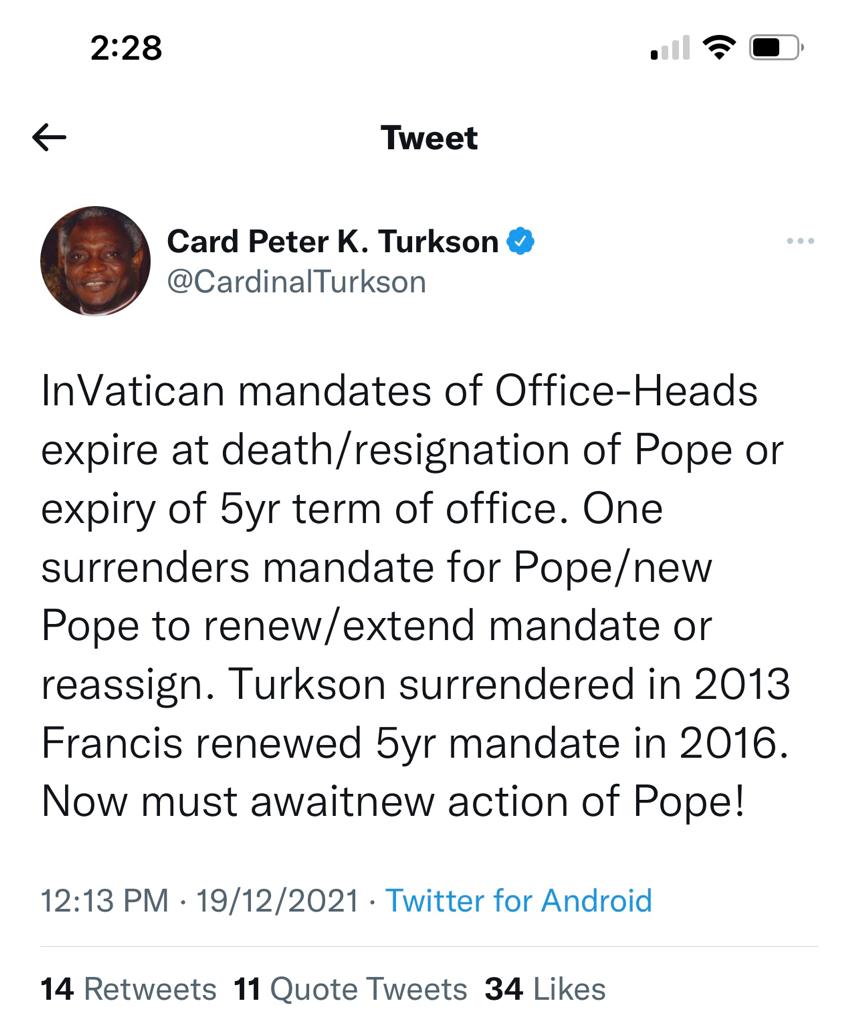