Bridge over River Nyenle in Ellembelle ready for use

Residents of Adubrim and nearby communities in the Ellembelle District in the Western Region have heaved a sigh of relief following the construction of a steel bridge over River Nyenle on the Adubrim-Ngabawei feeder road.

More than 1,500 people are expected to use the bridge.

Hitherto, the communities relied on a weak footbridge and a floating bamboo pontoon to cross the river, with all the attendant risks.

The plight of the people caught the attention of the Member of Parliament (MP) for Ellembelle, Mr Emmanuel Armah-Kofi Buah, who, in consultation with the district assembly, secured part of the funding from Sri Emas, an oil and gas service company, last year.

The 30-metre long bridge was completed at the cost of GH¢1.9 million with Sri Emas providing GH¢1 million of the amount.

Following the completion of work on the bridge, the people can now travel to and from Adubrim and the nearby communities with ease.

At the handover ceremony, Mr Buah recounted the struggle farmers in the area went through to access markets for their produce.

"It is important to note that communities here produce the chunk of the cocoa in the district. However, they have to make a choice taking the long journey towards the northern part of the region to access licensed buyers or risk crossing the river and losing part of the produce," he said.

The Ellembelle District Assembly, he said, lost a lot of revenue because a lot of economic activities were directed towards the adjoining districts.

"Our mothers, the aged and sick people could not cross the river when it bursts its banks. Therefore, handing over the bridge to the community at the time when rains are about to set in is a delightful moment for me and my people," he said 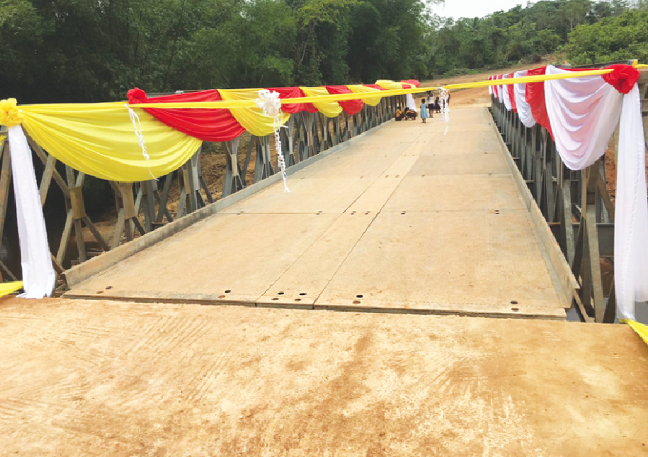 Mr Buah commended Sri Emas, an offshore oil and gas service company for its financial support that had led to the successful completion of the bridge.

He also expressed appreciation to the Department of Feeder Roads for the supervisory role it played in the execution of the project.

The Head of Local Content and Community Relations of Sri Emas, Ms Lydia Afi Alomatu, said the support offered by the company was in line with its commitment to make a positive impact on the lives of the people in its operational areas.

“As a result, Sri Emas decided to contribute the chunk of the amount needed for the completion of the bridge as we paid

¢1 million out of a total of ¢1.9 million required for the construction of the bridge,” she said.

She said social investment projects had been an important part of the company’s activities.

“It has been significant that a company involved in offshore and subsea activities finally ends up involved in a project very much inland and very remote from our usual centre of activities,” she said.