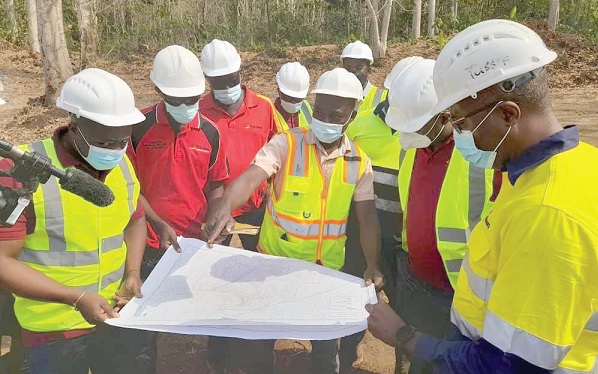 The Chief Executive Officer (CEO) of Rocksure International Ltd, Mr Kwasi Osei Ofori, has said the commencement of prospecting activity in the bauxite deposits within the Nyinahin Block B Concession is significant in the country’s natural resource development.

He said hitherto references to any active promotion of the nation’s local content policy in the mining industry was limited to the role of Ghanaian suppliers.

“The selection of Rocksure International for the Nyinahin Project by the Ghana Integrated Aluminium Development Corporation (GIADEC) holds the prospects for establishing something much more comprehensive in the prosecution of the overall national policy on local content in the Ghanaian mining industry,” he said.

Mr Ofori said this when officials of GIADEC visited the Nyinahin concession to familiarise themselves with the prospecting activities.

Mr Ofori stated that the Nyinahin Block B Concession was one of three concessions within the Nyinahin Bauxite Deposit in the Atwima Mponua District in the Ashanti Region.

He noted with satisfaction that the news about the commencement of the prospecting activity last week had already generated excitement in the communities.

“I believe that as we embark on the exciting historic journey involving the development and construction of a Ghanaian mine to produce bauxite ore, and the subsequent design and construction of a refinery that would produce alumina from bauxite ore in Ghana for the first time in our history as a mining nation, a sense of national pride will be strongly engendered,” he stated.

Mr Ofori indicated that the sustained interest and support of all stakeholders would encourage Rocksure to apply its proven capacity and determination to deliver on its historic national mandate.