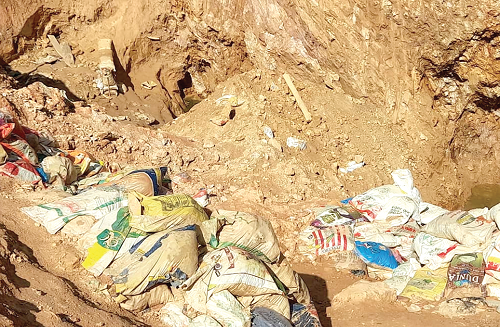 The pit (arrowed) in which the 10 galamsayers died Follow @Graphicgh

Ten persons, who allegedly failed to take advantage of a community mining programme of the government and sneaked into the bush at night to engage in illegally mining activities, died when a pit collapsed on them.

The incident, which occurred about 9:30pm last Wednesday at Atros, a community near Wassa Esikuma in the Prestea Huni-Valley Municipality of the Western Region, threw the residents into a state of grief.

Community members, including rescue teams, made up of officials from the National Disaster Management Organisation (NADMO), the police and other security agencies, could not find anyone alive.

The Western Regional Police Command confirmed the incident and said so far six out of the 10 bodies had been retrieved from the pit.

The rest are Nyamekye Kecher, 26, and Oboi Emmanuel, 24. Three other bodies are yet to be identified, while one body has still not been retrieved.

The remains have been deposited at the Tarkwa Municipal Hospital Mortuary.

According to the Regional Police Public Relations Officer, DSP Olivia Ewuraabena Adiku, when her outfit was informed about the incident, a team of security officers went to the scene.

She said one of the galamseyers, who identified himself as Kwabena Atuo, 35, sustained injuries and was rushed to Wassa Essikuma health centre where he was currently on admission.

The Prestea Huni Valley Municipal Director of NADMO, Mr Francis Abeiku Yankah, expressed his condolences to the bereaved families and the community.