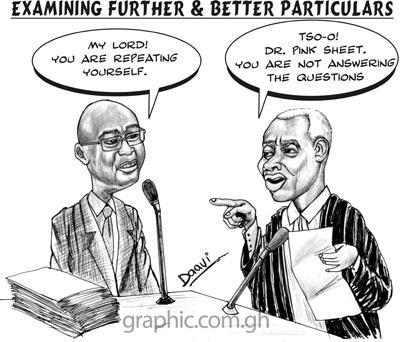 Slowly and almost imperceptibly but also quite discernibly from the stirring and buzz at the Supreme Court this week, we are inching millimetre by millimetre toward a verdict in the hearing of the New Patriotic Party’s petition disputing the results of the 2013 presidential election, Jomo.

On Tuesday, what was supposed to be a five-minute recess to enable the justices of the court rule on an objection by lead counsel for the petitioners, Mr. Philip Addison, travelled beyond thirty millennium-long minutes, as the justices apparently examined Addison’s objection within the context of making the hearing of the dispute pick up greater pace.

Addison had objected to the tendering to the court as evidence by the NDC’s counsel Mr. Tstastu Tsikata, of an exhibit the respondents had not included in the sworn evidence they provided the petitioners.

When after the recess the judicial sages announced their determination, it was to overrule counsel’s objection.

The exhibit in question was one of the so-called polling station pink sheets which contained evidence of over-voting. Now, is that not truly bizarre? In tendering evidence that affirmed the infractions the petitioners claim had occurred, was counsel for the NDC not strengthening the petitioners’ case?

Why would counsel for the NDC do that? And even more mysteriously, why would Addison not prance about with great joy, that counsel was tendering to the court, evidence that favoured the petitioners' case, instead of raising a spirited objection?

The answer is that the exhibit in question came from a polling station at Asokwa in Ashanti, which is an electoral citadel of the NPP. Counsel’s argument then, was that the electoral irregularities cited by the petitioners as evidence of rigging occurred nationwide, including electoral strongholds of the NPP.

Counsel appeared to argue that the petitioners had withheld pink sheets containing evidence of electoral irregularities and submitted only pink sheets from NDC strongholds to give the impression of deliberate infractions of the country’s electoral laws.

Precedents in Ghana’s legal history are being set at the hearing, which will probably be cited by legal authorities years to come: Lead witness for the petitioners for example, came close to being detained for more than an hour in the witness box! That was after counsel for the NDC who had been cross-examining him, argued that a lunch break notwithstanding, witness remained a witness under the law and should therefore not be allowed by the court to communicate with the NPP legal team or anyone else, come to think of it, during the lunch break.

Dr. Bawumia nonetheless retained one basic right of the human creature: The freedom of physical locomotion. He could move around alright but remain somewhat incommunicado on his feet!

Wednesday morning came with some sunshine. Tsikata apparently thought with it came another opportunity to whip up some more pink sheets from NPP electoral enclaves but the concepts of  “composite questions” and electoral grievance or complaint “categories” had come up and were being enforced at this stage of the hearing, denying him the opportunity.

In the court’s opinion, the question Tsikata asked witness the previous day regarding evidence of over-voting at Asokwa, applied to all tally sheets from other NPP strongholds which counsel wanted to question witness about.

The ruling was delivered by Presiding judge Justice William Atuguba in convoluted, labyrinthine and the linguistic pomposity typical of legal prose but never mind.

Justice Atuguba this week spent some time urging the petitioners, respondents and their lawyers to be civil in their interactions at the hearing: Monday’s hearing degenerated into a shouting competition at one stage: Tsikata wants to know from witness the identities of the individuals present when some of the evidence was being put together by the petitioners.

Witness starts to mention names but appears to falter, whereupon, lead counsel for the petitioners gets on his feet to ask what the relevance of counsel’s questions is.

Justice William Atubiga asks counsel for the petitioners what the irrelevance is. Tsikata tries to continue with his cross-examination while Addison continues his protest. Tsikata tells counsel to “shut up.” Addison’s face assumes a murderous countenance and you fear he might lunge forward and bite off Tsikata’s head.

Addison warns that he and his team are capable of liberally dispensing invectives too and tries extracting an apology from Tsikata that is not forthcoming. Tsikata tries to continue with his cross examination but Addison asks the bench to make counsel apologize or else..!

You can never tell with tempers in the courtroom, Jomo. Long, long before creation, Jomo, when I was reporting from the courts, I made the acquaintance of one fellow who made a pastime of sitting all day in the public gallery of a circuit court room listening to terrifying, comic, tragic and intriguing tales from the darker side of people’s lives.

Every morning, he would treat himself to a big calabash of cornmeal porridge and guinea corn cake {maassa} sold by a food vendor on the precincts of the court house, let out a belch and head straight into the courtroom and the gallery.

He appeared to be having quite a rollicking time until the day an angry famer accused of aggravated assault tried charging on a state prosecutor during cross-examination. “I put it to you” said the lawyer, that at around 5.30 pm that day, you went to the complainant’s house wielding a machete and…”

“Your red {blood shot} eyes! Were you there?” screamed the farmer adjusting his smock at the shoulders and moving menacingly toward the prosecutor. Totally beside himself with mirth, my friend in the public gallery roared like a king watching the antics of a royal clown while bobbing up and down in his seat, completely oblivious to the disapproving stare of the judge who ordered a bailiff to frog march the chap out. It was the last I ever saw of him.

Stop telling tales. It has already been told. Methinks the judge was a bit unfair, because if truth be told, the courtroom is a source of great entertainment but especially during cross-examination.

It is a fact superintendents of human resource and labour productivity are apparently now trying to come to firm grips with: They are grumbling about the televised Supreme Court hearing of the NPP’s petition distracting the national work force during labour hours.

The televised hearing is progressing for better or worse: With staggered, steadied, snail-paced, meticulousness and methodologically incisive persistence that has taxed the patience of many, Tsikata appears to be trying to build up a strong case for his client.

His strategy this week has been to try and get the petitioners’ key witness to admit after every round of cross-examination, that there was no basis for concluding on the grounds of the information on polling station pink sheets, that there had indeed been electoral infractions, that they were deliberate and that they had occurred on the scale alleged by the petitioners.

If it is the case that Tsikata intends leading Electoral Commissioner Dr. Afari-Gyan in cross-examination to refute the petitioners' evidence, then the climax is probably yet to come!