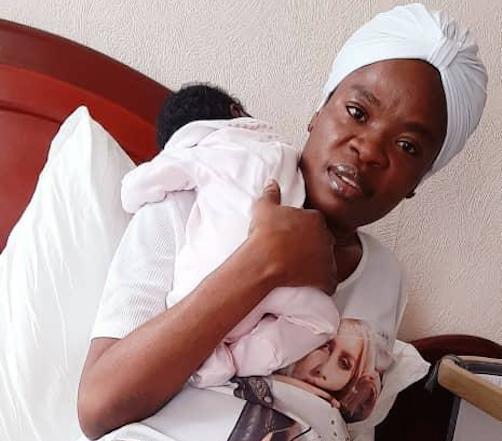 IT's been a little over a week since former host of Adom FM’s mid-morning show, Work and Happiness, Ohemaa Woyeje was delivered of a baby girl and she is all lovey-dovey about motherhood.

The bubbly radio personality is already enjoying motherhood so much that she says it is even difficult to describe the feeling.

“It is surreal. It is magical. Infact, I can't explain it. I don’t get tired watching her cuteness, I am enjoying motherhood so much. I tell you, I am loving every bit of it. Already the bond and love we share is so deep.

“Everything is new to me  but I’m loving, learning and practicing with my baby. I am lucky to have the necessary help to me take up my new role. The home care support team in Amsterdam is amazing.

"My in-laws are around and are very too supportive. And of course my loving husband is super helpful. All I can say is that it’s nice to be a mother. It is pure magical I would say.

According to Ohemaa, her new bundle of joy has affected her life in a very loving way within this short time she has been on planet Earth.

"She’s brought so much joy into my life. She’s my 'vindicator'. I remember some cheap blogger did a story about me sometime ago that I couldn’t make babies because I had abortions and had damaged my womb! I don’t know whether he was paid to do that story to just tarnish my image.

“I have been called names but I stayed strong. I nearly gave up at a point but held on with prayers and support from my mum and brothers.

“It hasn’t been easy for me but I knew it was only a matter of time ; God’s time. So my daughter has really brought me so much peace of mind.

Asked how her husband, Emmanuel Yaw Owusu Kusi is taking it all in, she said perhaps it is not for nothing that their daughter was born on Father’s Day as she already has her dad already wrapped around her little finger.

"As I said earlier, my husband has been amazing. He is always up with me when she wakes up in the night. He helps with changing her diapers, putting her to sleep among others. I couldn't be any luckier", she added.

Ohemaa Woyeje, real name Harey Adjoa Yeboah Asuama Kusi started her media career in 2003 with Nkosuo Radio in Kumasi. She moved to Sky FM in Sunyani then on to Zuria FM in Kumasi.

She later moved to Accra where she pitched camp with Top Radio; she was with the station for seven years and handled the mid-morning show for five-and-a-half years before Multimedia brought her on board to host Work and Happiness, which she handled for nearly six years.

Early this year, she tendered in her resignation to Multimedia and when Showbiz asked her then what was next after Work and Happiness, Ohemaa Woyeje, who runs a number of businesses, including an Ice Bar in Accra, said she wants to take a break and focus on her ventures before deciding on where to go next.

“I have a lot of offers I am considering right now. One of them is quite urgent and it is possible I might sign their contract, but for now I am taking a break, but rest assured, I will be back on air before the year ends,” she said.