Proud moments for me - Fritz Baffour on growth of comedy industry 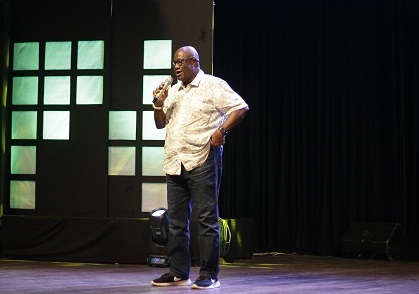 Fritz Baffour was excellent on stage at Popular but Broke
30.5k Shares

Pioneer stand up comedian and former Member of Parliament for Ablekuma South, Fritz Baffour, has stated that even though he was mostly criticised for not doing enough for his constituents, he is a fulfilled man now knowing that the seeds he sowed to groom the next generation of comedians had yielded results.

The legendary comedian, who cracked the ribs of patrons with his jokes at comedy show Popular but Broke, headlined by OB Amponsah, which came off at the National Theatre on Saturday, December 11, expressed his pride at how the current comedians were raising the bar.

"I remember how people used to criticise me that I was doing nothing for my people when I was a Member of Parliament. At the time, I was going on set shooting movies, grooming and supporting our young comedians and monitoring these young guys today I'm very very proud. They have been delivering and today have proved their worth," he said.

The statement was an introduction to the laughing spree that Fritz Baffour took patrons on during his presentation.

With a calm and collected posture on stage, Fritz Baffour, who is also a journalist and communication consultant, gave valid reasons he could not be considered as a spent force in the comedy game with his performance.

His jokes on Ghanaian, Nigerian, and Lebanese football commentaries had guests in stitches. A joke on politicians being comedians and a story about his time at Prempeh College were well-cooked jokes served on the night.

While Fritz Baffour's performance was definitely one of the highlights of the show, earlier presentations by the likes of James ID Brown, Ranzy popularly known as Ashaiman Chris Brown, Teekay, Jerry Ashinyoh, Oh Joe, Kojo Pjay, and Lekzy Decomic were also good.

Lekzy Decomic has proven to be a force in the comedy industry and on Saturday night, he was certainly at his best. He talked about a variety of issues but his portrayal of the presentation of awards at the Ghana Music Awards was probably the best moment during his performance. It's little wonder he had a standing ovation when he exited the stage.

Ranzy and Kojo Pjay were equally good on the night. While he's earned recognition for his skits on social media Kojo Pjay nailed it when he got on stage. His enactment of the stages people go through when they suffer a "running stomach" elicited thunderous laughter and applause.

However, the earlier presentations were just a tip of the iceberg of what patrons got from the headline act, OB Amponsah on the night.

OB Amponsah thrilled patrons with his jokes at the show

With an electrifying entrance that will stay in the minds of patrons for a very long time, the professional optometrist warned patrons to gird their loins for the "bombs" he will be throwing and he lived up to that.

President Nana Akufo Addo's alleged relationship with Serwaa Broni, his side chick was the joke that set the tone for the many "grenades of jokes" OB Amponsah threw during his performance.

With confidence that could only be attributed to a well-rehearsed presentation, OB was such a delight to watch with interesting narrations of how the COVID-19 pandemic greatly affected the works of the terrorist group ISIS and religious denomination, Jehovah Witnesses.

On the whole, Popular but Broke was a good production and probably proof that Ghana's comedy industry is taking its rightful place on the continent.

Apart from the jokes, the full house of patrons was also serenaded with performances from Sugar Lord and Highlife artiste, Kwabena Kwabena.

Patrons had an awesome time at Popular but Broke

Popular but Broke featured the biggest comedy acts from the past four generations. In recognition of their contribution to the comedy industry, Kwaku Sintim Misa, Fritz Baffour and Mikki Osei Berko popularly known as Master Richard were presented with citations.

The show was attended by a number of industry stalwarts including actor Van Vicker, John Dumelo, Kofi Kinaata and Socrate Safo.