Welding their way to the top; young, passionate and ambitious 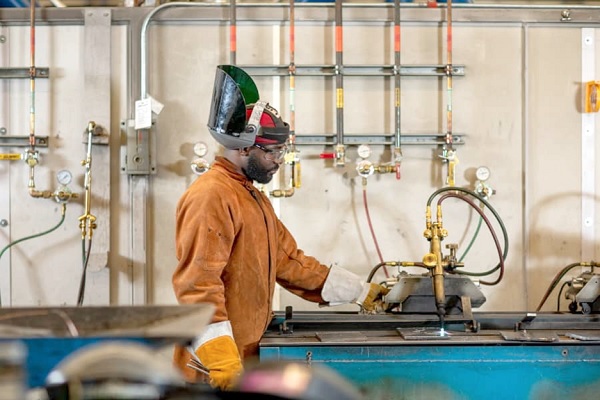 It is said that passion is a powerful force in accomplishing anything you set your mind to and in experiencing work and life to the fullest extent possible.

There are people who follow their passion to the fullest, while others also have to realign their passions to enable them to put bread on the table.

Some decided to go to school to learn welding, while others had to reinvent themselves, forgoing their tertiary degrees to embark on a new trade in welding when they could not secure jobs after school.

Imagine coming from a community where there are neither jobs nor tools to enable you to accomplish your trade, then Lady Luck smiles on you by giving you the opportunity to be trained by experienced people abroad.

Indeed, this is an opportunity every young person would desire.

The lucky wand fell on five Ghanaians who were sponsored to undergo training in advanced welding technology in Canada under the Accelerated Oil and Gas Capacity-building programme (AOGC).

Canada  enjoys a long history of world-class standards in the discipline of welding under the stewardship of the Canadian Welding Bureau (CWB).

The beneficiaries, who were sponsored by Baker Hughes GE, a full stream oil and gas company, to the tune of $250,000, had the chance to undergo a 10-month intensive training in all stages of an advanced and stainless steel welding course at the Northern Alberta Institute of Technology in Edmonton and were issued with CWB instructor certificates.

They will, in turn, impart the knowledge acquired to train Ghanaian welders for certification from the American Welding Society and the CWB. 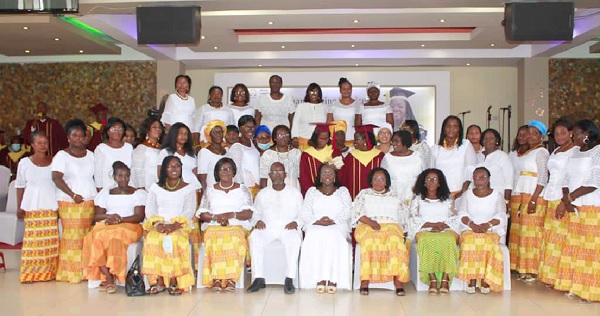 Wednesday, August 12, 2020 was International Youth Day and was marked across the world on the theme: “Youth Engagement for Global Action.”

This year’s theme sought to highlight the manner the engagement of young people at the local, national and global levels was enriching national and multilateral institutions and processes, as well as draw lessons on how their representation and engagement in formal institutional policies could be significantly enhanced.

With this theme, The Mirror would like to celebrate these young people who have just been exposed to approved global practices in the field of welding and would also help build the necessary human resource for the development of the upstream oil and gas sector in the country.

Last Tuesday, this reporter interacted with these beneficiaries who had unique stories to share at the head office of the Petroleum Commission in Accra. The youngest of them is 22 years and the oldest is 32 years.

Abdul is the oldest of the beneficiaries and holds a Bachelor of Arts degree in Communications from the Islamic University in Accra.

Asked why a communications degree holder had to switch to welding, Mr Dayankrah explained that it was a decision he took when he couldn’t secure a job after his national service.

“I told myself the world was changing; therefore, it would be good to change my mindset and acquire a skill when I wasn’t getting a job.”

Coincidentally, various studies show that this same reason has spurred a spike in apprenticeship training in Canada, with many degree holders going for trades training after the 2008-2009 global recession.

Mr Dayankrah said he put his degree aside and went to Bomso, a suburb of Kumasi in the Ashanti Region to learn how to weld, and that was how the journey started.

“I had a master who was training me in the skills of welding and so when bigger jobs come, we go to Suame Magazine, an industrialised area with many workshops for metal engineering and vehicle repairs, to do the job.”

“This training in Canada was an eye-opener for me because I realised that the welding process we learnt by the roadside in Ghana was not the same as what we were exposed to. Besides, health and safety issues were a key area in the training process, which was very educative,” he stated.

According to him, he learnt how little mistakes in welding could spark fire and destroy life and property, while the fumes could have an effect on a person who did not wear and use the appropriate outfit and tools to work.

He had his secondary education at the T.I. Ahmadiyya Senior High School (SHS) at Asokore in the Sekyere East District of the Ashanti Region.

Mr Atobrah, the youngest among the beneficiaries, is from Eznlibo in the Jomoro District, while Mr Bewikah is 23 years old from Asanta in the Ellembelle District.

They are both SHS graduates from the Kikam SHS and Technical Institute in the Ellembelle District in the Western Region.

According to them, although their school was a technical institute, they lacked basic welding tools, which made it difficult for them to have ample practical time.

“The school had about 14 welding equipment which over 200 students had to use, so there was not much practical time for students. Besides, there was not enough gas and electrodes to go round for all students. However, in Canada, there were hundreds of machines and everyone had one to himself with as many electrodes that you could use,” they recounted.

They told The Mirror that in Ghana, they only learnt one welding process, which was the Shielded Metal Arc Welding (SMAW), also known as stick welding, a manual process using a flux-coated consumable electrode with a metal rod at the core.

Both of them are graduates from the Takoradi Technical University (TTU) in the Western Region. Mr Oduro started off as a Science student at the St Mary’s Boys SHS at Apowa in Takoradi.

He had the opportunity to do his practical attachment at the Takoradi Port where he started welding and, therefore, decided to pursue an advanced welding course on part-time basis.

He holds a Higher National Diploma (HND) certificate in Mechanical Engineering (Plant option) and a Bachelor of Technology degree in Automobile.

He further went in for his degree in the same area of study at TTU.

For them, the training had exposed them to the best standard of welding at the international level that was acceptable, and they were ready to teach other Ghanaians to adopt such practices.

“Here, some of us toy with safety issues; out there it is a big deal. In fact, you need to be appropriately dressed before you will be permitted into the workshop for training. At every point, there are safety markings which you have to adhere to,” they said.

All the beneficiaries noted that it was time roadside and institutionally based welders formed an association so they could all share the best practices as was done internationally.

The Manager of AOGC, Mr Mustapha Hameed said the training would enable the beneficiaries to work efficiently in the upstream oil and gas industry to reduce the hiring of expatriates and also build local capital.