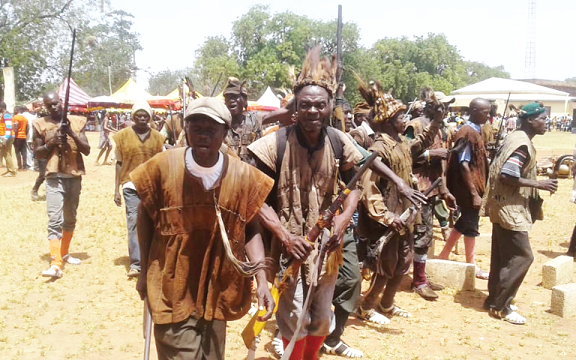 Once again, the rains that usher in the cropping season have abated, bringing in sunshine with its glory to the Upper West Region.

With the sunshine, the dry season is thus stepping up the pace for a bumper harvest of crops that will bring satisfaction to the people after their toils.

With the harvesting of crops, the people, therefore, need to express their gratitude to God, deities and ancestors for a successful agricultural harvest and pray for another peaceful year, thus the start of their annual festivals. The farming season is from May to October.

Festivals are thus linked to agriculture and are celebrated to thank God and the ancestors for bountiful harvest. The occasions normally full of colourful displays could be appealing, thereby attracting prominent people, including chiefs, politicians, tourists and clergy from all walks of life.

The region can boast of festivals that can be appealing to tourists, at both the domestic and international levels. Thankfully, the COVID -19 pandemic has abated, which has led to the relaxation of restrictions that can allow tourists to move around.

As such, steps should be taken to invite citizens to visit festivals to participate in the numerous events in the region and view the picturesque touristic attractions.

The region boasts of major annual festivals such as the Dumba at Wa by the Wala Traditional Council, which ended last Sunday, and Kaka (Hippo) festival by the people of the Wa West District with its capital at Wechiau late in November.

Other festivals are the Paragbiele in January at Tumu, Kobine in November at Lawra, Kakube during the last week in November at Nandom and Kukur Baghr by the people of Fielmuo on December 30.

According to the Secretary of the Wala Traditional Council, Naa Kadir Ibrahim, the celebrations of the Dumba festival, which begun last week Tuesday and was climaxed with a durbar by the chiefs and people last Sunday, was revived by Wa Naa Yamusa Pelpuo IV in 1920, in commemoration of the birth of Prophet Mohammed of Islam.

He traced the festival back to the 18th century when their ancestors migrated from Nalerigu in the North East Region to Wa over a chieftaincy dispute.

Apart from that, the region also has many tourist attractions, most of which relate to the slave trade such as the Gwollu slave defence wall, the ancient caves at Sankana and Dahili. Others are the slave camps at Pizaga and Dolbizon and the slave market at Kassana.

The cemetery of fame dedicated to the famous Ghanaian anti-slave trade campaigner, George Ekem Ferguson, lies in Wa as a monument for cultural tourists and students of history.

The region also boasts of the most interesting local and Sudanese architecture typified by the Wa Naa's magnificent palace in Wa and the Nakore mosque, which dates back to the 16th century.

The all-stone gothic art building in Nandom is the largest in West Africa and portrays both ancient and modern architectural styles. Above all, you are sure to meet open and friendly people who are willing to talk to you with smiles on their faces.

Currently, Wa remains a major commercial, educational and administrative capital of the region.

From the nation's capital, Accra, one can reach Wa by varied transport services that depart every day. The 10 to 12-hour trip gives the visitor the real opportunity to see the countryside in gradual transition in topography, vegetation, climate, architecture and social patterns and above all, adventure.

Airlines also fly from Accra to Tamale and from Tamale, one can join public transport. International visitors travelling through Burkina Faso could also reach the region through the Hamile border.

Naa Kadir Ibrahim has called for the revision of all outmoded customs and traditional rites with the view of eliminating all outmoded ones to bring them at par with modern times.

He has also called for peace and tolerance, which he said was a prerequisite needed for development. He also urged the people to observe strictly all COVID -19 protocols, as the government was working tirelessly to acquire the vaccines to deal with the pandemic.

The Dumba and Kaka festivals and tourism, if well packaged and given the needed advertisement, could be a major source of revenue for the region.

According to the Regional Director of the Ghana Tourism Authority (GTA), Mr Moses Ndewin Ndebugri, the two, especially with domestic tourism, could go on to make a veritable gold mine for the local people in particular.

GTA in the mix

Thus, Mr Ndebugri said, the GTA, in collaboration with stakeholders, including traditional authorities, was creating awareness of domestic tourism as part of plans to diversify the economy which relied heavily on agriculture.

He said tourists were looking for places to relax and spend money for satisfaction, as such the GTA over the years had tried to properly package and advertise the opportunities to reap from such veritable goldmine. Nonetheless, he said the COVID -19 pandemic had impacted negatively on tourism receipts, especially on accommodation, tourists’ sites and nightlife.

“That's why we are collaborating with the traditional authorities to use festivals to boost domestic tourism, where patrons of festivals will experience the rich culture, enjoy local cuisines and gastronomy, feel the sound and rhythms of music and dance and explore the tourists’ sites around," he said.

He added that unlike in the past when the focus was on visiting businessmen, now more attention was being paid to people looking for vacation spots, attracting visitors to marriage ceremonies, naming ceremonies funerals, among others.

Mr Ndebugri said now that tourism was being touted as a high income earner, everything was being done to entice tourists to patronise festivals and the sites to share their experiences with others, enjoy local dishes and feel the xylophone rhythms of the region.

“The idea is to encourage, develop and get the region involved in tourism development in the country. The contribution this will be making to our national development will be the creation of more jobs," he stated.

Dumba festival: It is widely celebrated across northern Ghana and was originally to commemorate the birth of the Holy Prophet of Islam (Prophet Mohammed S.A.W).

In the Upper West Region, it is celebrated by the chiefs and people of the Waala Traditional Area to usher in the New Year and also to ascertain the physical health of the Overlord (Wa Naa).

The six-day celebration is climaxed by the Wa Naa jumping over a cow to indicate his health status. It is believed that a chief who could not successfully jump over the cow is not likely to live up to the next Dumba festival.

Kaka festival: This celebration revolves around the hippopotamus, which oral tradition says saved the ancestors of the Wechiau area (the Toboh Chiele Clan) when they were pursued by slave traders. As a result, hippos are revered and not killed in the area.

Fleeing from the advancing slave traders they had to use the Black Volta and surprisingly they found what they thought were a line of black rocks jutting out of the water which they walked on to cross to the other side of the river.

It was later that they got to know that those black things were indeed the hippos which had formed a bridge for them to cross over, which they believed was an answer to their prayers to the river god (Naamani) for safe passage.

The maiden celebration of the 'Kaka' festival of the chiefs and people of the Wechiau Traditional Area was held in May 2015 to show their gratitude and appreciation, which their ancestors expressed to God and the Hippos for the deliverance they gave them in their time of need.

Kobine festival: Literally translated as “end of farming dance” it is celebrated by the chiefs and people of the Lawra Traditional Area to mark the end of the farming season and in anticipation of a bumper harvest.

The three-day festival involves a display of farm produce and display of the famous Kobine dance. The Kobine dance is done vigorously with music from the xylophone.

Kakube festival: This is celebrated by the chiefs and people of the Nandom Traditional Area. It is a harvest festival celebrated to thank God and the spirits for a bumper harvest.

It also showcases the rich Dagaaba culture, which includes the dagaaba smock, the pito, the Bawa dance and farm produce for that year.