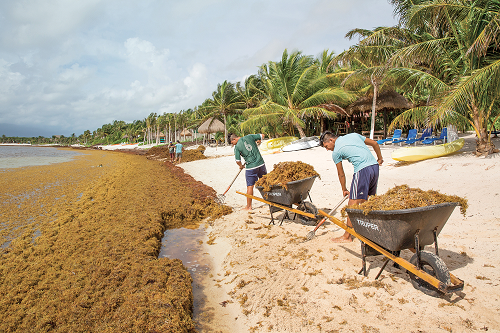 On Tuesday, October 19, 2021, the Daily Graphic carried a story on its back page headlined “Seaweed floods western coastline - Communities call for help”, which portrayed the hopeless situation residents of fishing communities and beachfront hospitality operators in the Western Region found themselves in, due to the invasive seaweed, sargassum.

Much as we identify with the plight of the fisherfolk as well as the hospitality operators whose businesses are being hampered by the seaweed, we are of the view that the approach to the challenge is not the best.

Instead of ruing our lot with the influx of the seaweed, we opine that by this time our researchers, fisheries and aquaculture and environment, science, technology and innovation ministries should have put a team together to find out the best way to deal with the influx, which watchers say is an annual occurrence although the volume is massive this year.

Nothing happens per chance and we may be sitting on a gold mine without knowing it, if we do not find out about the weeds that have invaded our shores.

We do not begrudge the fishing communities and beachfront hospitality operators for appealing to the government and the Environmental Protection Agency (EPA) to help contain the pollution of the beaches by the sargassum weeds, which are tropical and sub-tropical brown macroalgae (seaweed) of shallow marine meadow.

But for the environmental authorities to describe the situation as very serious, and that the quantity of weeds being washed ashore is beyond the capacity of any of the municipal, metropolitan or district assemblies to handle, suggests that the thinking for now is just about clearing the seaweeds from the shore.

Although sargassum, which is believed to have originated from the North Atlantic and the Caribbean waters and carried to the west coast of Africa by winds and high tidal waves may contain substances that could cause sore throat and irritate the lungs as espoused by the EPA, it does not mean the weeds are entirely useless.

In fact, researches done on the sargassum species say that they are a nutritious and rich source of bioactive compounds such as vitamins, carotenoids, dietary fibres, proteins and minerals, and are a great resource for the pharmaceutical industry.

It is also considered to be an excellent medium for use as landfill and can be used to build up dunes and beaches to combat the threat of beach erosion. Sargassum is increasingly being used as nutrient-rich fertiliser and compost and we can find out how what nature has bestowed on us, which we see now as a nuisance, can inure to our benefit as a country.

Environmentally, the sargassum weed is said to act as a mobile transport habitat for a great variety of marine life and as refuge for young fishes that may lack mobility.

It has been established that when young fishes find a safe haven in the sargassum weed, they are carried far in a more protected habitat from the ocean’s predators, making it possible for them to survive.

Many species of marine life take refuge in the sargassum weed and travel thousands of miles on this floating habitat, seeking protection and survival on the course.

Indeed, in a press release issued in 2015 by the government of the Virgin Islands on the influx of sargassum, the Ag. Deputy Chief Conservation and Fisheries Officer, Mr Mervin Hastings, confirmed that the sargassum seaweed seen washed along the Territory’s shoreline provided a nursery for over 120 species of fish and invertebrates and provided protection similar to that of a mangrove.

He added that the seaweed was an important nursery habitat that provided shelter and food for endangered species such as sea turtles and for commercially important species of fish such as tunas and mahi-mahis.

Yes, let us try to minimise the impact of the sargassum seaweed on livelihoods in communities along the country’s shoreline, but let us also think through how they could become a blessing to those communities.