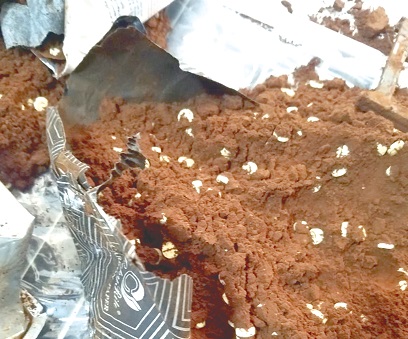 Some of the narcotic drugs that were impounded
30.5k Shares

The Narcotics Control Commission (NACOC) has intercepted $1.4 million worth of Amphetamine, a narcotic drug, at the Accra Central Post Office.

The narcotic drug, which was concealed in five Ghana Post branded boxes, was intercepted on Tuesday November 22 on suspicion by officials of the commission.

The Head of Public Affairs and International Affairs Department of NACOB, Nana Osei Nkwantabisa, who disclosed this to the Daily Graphic yesterday, said the boxes were all destined for the United Arab Emirates.

He explained that upon suspicion, the brown boxes were opened and found to contain a total of 150 packets of coffee, labelled "Café Naijar Classic”.

"Each packet was found to contain 624 tablets and a total of 93,600 tablets with an estimated street value of $ 1.4 million," he said.
Nana Nkwantabisa said a field test had been conducted on the tablets and the results proved positive for Amphetamine, a narcotic drug.

He said samples of the exhibit had been forwarded to the Ghana Standards Authority (GSA) for further examination.

When asked about the identity of the culprits, he said because it was a postal service, the commission was still connecting the dots to unravel the unknown faces behind the illicit drugs.

"What I can confirm to you is that the drugs were moved from Newtown in Greater Accra. Investigation is ongoing, but the person is at large.

"They put fake contact numbers on the thing and put the receivers’ number. When the receivers sense danger, they will also go into hiding, and it becomes quite tedious to get them; but we are working to get them," he said.

The NACOC public affairs head advised members of the public to refrain from engaging in the trafficking of narcotic drugs.

He said such an act was a criminal offence under Section 37 of the Narcotics Control Commission Act 2020 (Act 1019).

"The commission urges the general public to check the contents of parcels handed over to them before taking custody in order to be informed of the contents, especially before and during the Christmas season," he said.