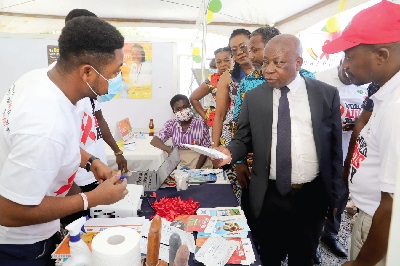 Kwaku Agyeman-Manu (right), Minister of Health, inspecting an item at an exhibition at the 2022 World Aids Day in Accra. With him are Dr Leticia Adelaide Appiah (3rd from right), Executive Director of the National Population Council, and others. Picture: GABRIEL AHIABOR
30.5k Shares

The President, Nana Addo Dankwa Akufo-Addo, has said the government will ensure the constant supply of anti-retroviral (AVR) therapy drugs despite the prevailing economic challenges in the country.

“I will want to assure all persons living with HIV within our borders that despite the challenging economic climate, the government will continue to prioritise uninterrupted supply of anti-retroviral medicines to guarantee your continued stay in care,” he added.

The assurance comes on the heels of calls by global partners that if the government does not make available $10 million by March next year, there will be a massive shortage of ARV drugs in the country.

This is because there will be no donor funding for further purchase of the drugs if the current supply of ARV runs out.

President Akufo-Addo gave the assurance in a speech read on his behalf by the Minister of Health, Kwaku Agyeman-Manu, to commemorate this year’s World AIDS Day in Accra yesterday.

It was on the theme: “20 years of multi-sectoral HIV response: Accelerating progress to end AIDS”.

The global theme was: “Equalise”, urging all to take the necessary action to address inequalities that drive and perpetuate HIV and AIDS epidemic.

The event was also used to celebrate the 20th anniversary of the Ghana AIDS Commission (GAC).

The President said he recognised and commended all individuals, communities, development partners and civil society organisations who had made distinguished contributions to the national HIV response.

“We celebrate their patriotic effort which has steered the national HIV response from the early days of hopeless experimentation to its current status of a formidable institution poised to defeat AIDS,” he said.

The Director-General of the GAC, Dr Kyeremeh Atuahene, said: “We cannot talk about barriers to progress of HIV response without talking about funding”.

According to him, the “law empowers the commission to mobilise domestic funding to support the national response with the support of the government, the private sector and the good people of the country. We are working to fulfil the mandate”.

He said in collaboration with the International Labour Organisation (ILO) and the National Tripartite Committee, the National HIV and Wellness Workplace Policy was being reviewed to provide guidance for ministries, departments and agencies (MDAs), including metropolitan, municipal and district assemblies (MMDAs) and the private sector workplace HIV and wellness programmes.

Dr Atuahene further said: “Our partnership with the media is aimed at using both traditional and digital media to educate the public and to roll out anti-stigma, condom use, prevention and other campaigns, as well as create demand for HIV services”.

The US Ambassador to Ghana, Virginia E. Palmer, pledged her country’s support to fighting HIV in Ghana.

She urged the people to make the effort to know their HIV status for advice and treatment.

The Country Representative of the World Health Organisation (WHO) Ghana, Dr Francis Chisaka Kasolo, called for strategies that would target high-risk population to end new infections.

The President of NAP+, Elsie Ayeh, also advised the people to ensure they live healthy lifestyles.

For his part, the President of Ghana HIV & AIDS Network (GHANET), Ernest Ortsin, called for local funding to support HIV and AIDS treatment in the country.